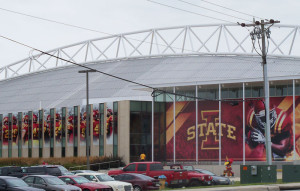 When Iowa State coach Paul Rhoads looked at ways of bouncing back from a second straight disappointing season he began in the lockerroom.

Rhoads worked to rebuild the chemistry on the team after last year’s 2-10 record that included a winless Big-12 mark.

“It’s intentional because it has been a large part of our focus as well the physical development and improvement of our kids. It was essential, it was necessary after some lapses in that chemistry that’s necessary for a team to find some success,” Rhoads says.

Rhoads says the effort paid off and it is one of the reasons he is confident the Cyclones will make major strides this season. How much the Cyclones improve may rest with the development of the offensive line as well as a thin and inexperienced corps of running backs. Defensively he says the front 7 are the key as they have a lot of young players who have not played a snap.

Rhoads says another key will be how the Cyclones handle adversity as he says they lost three key players in the first part of the season opener. “We’ve got to respond to that adversity and learning from history is most important. Rhoads is confident the Cyclones have the talent they need to get back to a bowl game.

The opener is at home on September 5th against UNI.