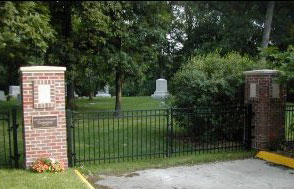 The gates of the ISU Cemetery. (ISU web page photo)

Iowa State University is moving ahead with a plan that would create a space at the university cemetery for those who really want to remain forever true to ISU.

University vice president Warren Madden presented the proposal to the Board of Regents Wednesday that would create a cremation garden at the university cemetery for the remains of Cyclone loyalists. He says the cemetery is only five acres and the space for normal burials is limited.

Madden says through the years the policies have been tightened so that no the only people who can be buried in the cemetery must have retired from the school after 20 years of service. And there is an exception for former university presidents. Madden says this plan would allow more I-S-U loyalists to have their final resting place in ISU. “What we are proposing to do is work with an organization called Fans-4-Ever, which is actually in the business of creating cremation areas and how one deals with cremains,” Madden explains.

He says cost and other issues are making more and more people chose to be cremated. “Burials are changing demographically across the country. Today, nationally about 50 percent of the interments that are done are through cremation,” Madden says. “That projected to grow to the 70 to 80 percent range change as baby boomers reach that point.” Madden says they want to explore a way to use the space for cremated remains.

“The space for cremation is roughly a cubic foot — and you can accommodate a large number of cubic feet of space in a five-acre area doing it tastefully and appropriately,” Madden says. “And we’ve had inquiries and have a number of alumni and people who have an interest in Iowa State in having their final remains placed at the campus.” He says the company believes they it would cost someone around $6,000 to purchase a space.

“We will have to test the market, this project will not proceed unless there are enough presales…we think you need about a million dollars on the front end of this to do the initial development and do the landscaping and things around it,” Madden explains. He says they would also create an endowment to help maintain the cemetery. Madden says they want to be absolutely sure the demand is there before they go ahead with the project.

“Once we do this, this is not a project where in five years you can sort of decide it wasn’t the right thing to do — because once you have a cemetery — your are pretty committed to having the for the indefinite future,” Madden says. Iowa State University has maintained a cemetery on the northwest corner of the campus since 1876. Madden says it is one of the oldest active collegiate cemeteries in the country.