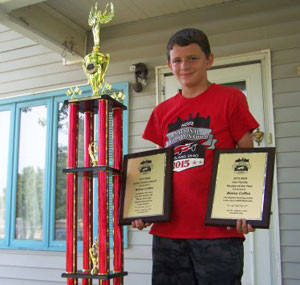 Coffee cruised into the finals, then narrowly lost his last race. “I’m fine about it now. I was kind of mad when I got out of the car,” Coffee said, laughing. “This was one of the harder fields I’ve ever had to race.” The soon-to-be 8th grader returned home from Ohio earlier this week with a massive trophy. “It’s a lot taller than me. It extended from the front of our car all the way to the back of the car. We were riding with a trophy between all of us,” Coffee said. Blaise has been racing soap box derby cars for four years.

He was the top seed in his field at nationals. “Everybody had me as their favorite to win…ended up not getting it. Oh well, next year, I’m coming for it,” Coffee said. Blaise’s uncle, Aaron Coffee, and his grandma traveled with him to Cleveland for the 10-day long competition.