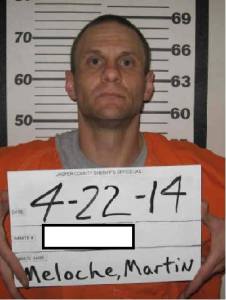 A Newton man who admitted to bomb threats that shut down the Jasper County Courthouse for several hours on December 29th has been sentenced to an additional five years in prison.

Forty-year-old Martin Meloche pleaded guilty to falsely reporting an explosive device and the additional jail time will be added to the five years he was already sentenced to for third offense possession of methamphetamine.

Jasper County Sheriff, John Halferty, says information from social media and the public led to Meloche’s arrest the day after he phoned in two bomb threats. He was scheduled to be sentenced on felony drug charges on the day he made the threats. Sheriff Halferty says the bomb threats impacted a lot of people.

“County office holders had to close their doors, so people were not able to access them. The court system was affected,” Halferty says. He says some private businesses also chose to close their businesses for a period of time. The sheriff says deputies went door-to-door in a one block area to make business owners aware of the threat. “We felt that we’d cleared the building well enough that there was not a device in the building. But we also knew that the immediate area also needed to know, and we like to let them make the decision. If there’s a device located — or the threat was more credible — then we’re going to tell them that they have to evacuate,” Halferty says.

Deputies say they found drug paraphernalia on Meloche when he arrested him and he allegedly was caught hiding controlled substances at the jail. Meloche still faces a possession of contraband charge and another count of falsely reporting an explosive device. He is scheduled to appear in court on those charges on September 14th.