You are here: Home / News / Trump’s treatment in debate is debated at GOP event in Waterloo 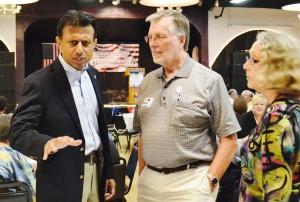 Bobby Jindal meeting with attendees of the Lincoln Dinner event in Waterloo.

“I didn’t feel like they gave him fair questions, not the same as the others, more kind of trying to piss him off,” she said, with a laugh.

Carmen Halverson of Cedar Falls likes Trump’s business acumen — and she likes having him in the race.

“I think he’s going to make a difference,” she said. “He has a unique position.”

“I thought it was well done by FOX and I thought most people handled themselves quite well,” Wood said. “I don’t think Trump did, but there are a lot of Trump supporters and they think he did.”

“I think Trump was treated fairly,” he said. “I think he’s got to answer those quesstions. It’s going to be very tough to go up against Carville and Begala and all those people if you should get the nomination. I think Megyn Kelly’s a push over compared to what those people will be, so he’d better get used to it. I mean I don’t know what else he expects. Everything you’ve said all your life is now fair game when you run for president.”

“I’d just like to note that since FOX News has been a station on cable, we’ve no conservative accomplishments — none, zero, zip — and we live under the constant threat of amnesty,” said Laudner, who was at the event in Waterloo. “I don’t know necessarily why FOX News is the go-to channel for conservatives, let alone Republicans, to have a debate and expect that it’s going to be a two hour advertisement.”

Neither of the candidates who spoke at the Black Hawk County Repubican’s Lincoln Dinner mentioned Trump by name. Lousiana Governor Bobby Jindal earned applause for his critique of the Iran nuclear deal, his opposition to the “Common Core” education standards and his promise to expose Planned Parenthood to intense scrutiny if he’s elected president. 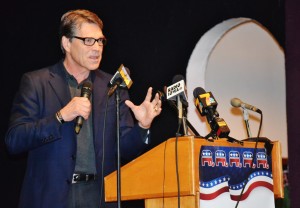 Rick Perry speaking to the crowd at the 8th Annual Lincoln Dinner.

Rick Perry told the crowd he was a “competent, confident leader” who as the governor of Texas had managed the world’s 12th largest economy, about the size of Canada’s.

“I told Scott Walker the other day, I said: “Scott’ your’s is about the size of Greece,'” Perry joked, earning laughter from the crowd.

Four years ago, Perry arrived at the same event in Waterloo riding high in the polls, while rival Michele Bachmann arrived having just won the Iowa GOP’s Straw Poll. The evening marked the beginning of Bachmann’s descent and just the opening weekend of Perry’s 2012 Iowa campaign. Perry told the crowd tonight he is employing a different approach in his second bid for the White House and spent more time in Iowa last year than any other 2016 candidate.

“Let’s go do this Iowa. Let’s go win this election. I want your support,” Perry said. “…Thank you for being here tonight.”

Ben Carson also campaigned in Iowa Sunday, speaking at a church in Osceola this morning and holding an event this afternoon in Council Bluffs featuring food and entertainment.