You are here: Home / News / Branstad making plans for 2016 meeting of nation’s governors 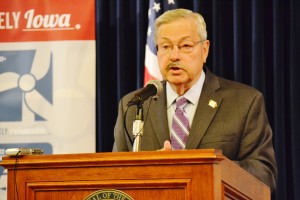 Governor Terry Branstad has formed a non-profit group to raise at least $1.5 million for a “family-friendly” National Governors Association meeting in Des Moines next summer.

“We really want to make it an all-Iowa thing,” Branstad said today, “…the food, the entertainment, the cultural activities, fun activities for the kids as well.”

An evening at the statehouse is planned, plus a reception at Terrace Hill, the governor’s mansion in Des Moines. There will also be activities planned on the state fairgrounds. Then-Governor Tom Vilsack hosted the nation’s governors in Des Moines in 2005.

REO Speedwagon played a concert for the group on the fairgrounds, although Vilsack had hoped to land ZZ Top — his favorite band — for the event. Branstad’s not saying what entertainment he’s aiming to book for the 2016 meeting.

“That is what they call a real trick questions,” Branstad said. “…I don’t want to pick sides on that because there’s a lot of great bands…As of now I don’t have a choice.”