You are here: Home / Sports / Iowa looks for turnaround with new QB under center

The Iowa Hawkeyes hope a change at quarterback will reverse the program’s slide into mediocrity. Junior C.J. Beathard was named the starter just days after a Taxslayer Bowl loss to Tennessee and he hopes to jump start an offense that struggled making big plays.

“There was a consensus that we thought it was the right thing to do. And I thing there’s a stronger consensus right now that we did the right thing,” Ferentz says. He says there’s a lot of different styles among quarterbacks and they are confident Beathard is ready to go.

Since winning the Orange Bowl after the 2009 season the Hawkeyes have posted a 34-30 record and season ticket sales have plunged 16 percent heading into the new season. “I don’t think anybody has an inferiority complex or any of that stuff. You know, that’s the great thing about sports, you get a chance to get back up on your feet and do something about your last experience or things that you weren’t happy about,” according to Ferentz, ” So no, we didn’t have to call Dr. Phil in or anything like that for our football team. We’re just trying to work a little bit harder, work smarter, and get better at the things that really determine successful outcomes.”

The Hawkeyes must replace their starting tackles on both sides of the ball. On defense, the linebackers and secondary are experienced. “We have to play better, we gave up too many big plays, and it’s not just the secondary, it’s a team thing,” Ferentz says. He says they should be able to get better now that they are more experienced.

Iowa finished 7-6 last season and more of the same is expected this year as the Hawks have been picked my most preseason publications to finish fourth in the Big Ten West.

“You know, in football and in life, anything you do, all you can do is ask for opportunities, and when the calendar changed over in January, the thing we tried to communicate to our players was it’s a new opportunity. We’ve all been very excited about that and the work that’s gone into it, and I think most importantly we’re eager to continue that work, that important work, as we try to prepare for the season,” Ferentz says. 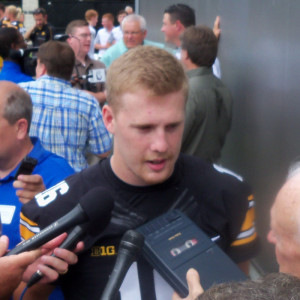 Beathard says he is looking forward to the opportunity with some experience under his belt. He says will take more of a leadership role as the quarterback. “It’s easier too now that I am getting all the one reps and not switching in and other with another quarterback…it’s a lot easier to lead this way,” Beathard says.

The Hawkeyes open the season at home on September fifth against Illinois State.