You are here: Home / News / Branstad biography to be released as governor reaches national longevity mark 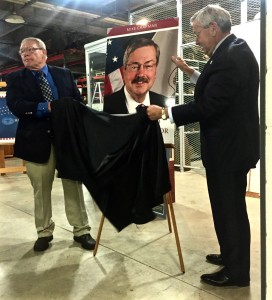 A biography about Iowa Governor Terry Branstad is due for release in December — when Branstad will become the nation’s longest serving governor ever. Branstad unveiled the cover of the book during a news conference at the State Historical Building this afternoon.

“I’m so pleased that all the proceeds of this book will go to a non-profit that will be involved in promoting and preserving Iowa’s rich history,” Branstad told reporters.

The book is titled “Iowa’s Record Setting Governor.” It’s written by Mike Chapman, the founder and publisher of “The Iowa History Journal.”

“I interviewed about 44 people. I read over a thousand newspaper articles. I drove all over the state. I talked to people that had gone to school with him,” Chapman said. “…In all truthfulness, this has been one of the hardest tasks I’ve ever tackled, but one of the most gratifying. I am a huge fan of the man, Terry Branstad.”

The book will include photos of Branstad and his family as well as a collection of cartoons drawn by Brian Duffy, the former cartoonist for The Des Moines Register.

“When I was asked if I could contribute some of the cartoons, I initially thought it was a prank phone call,” Duffy joked during the news conference.

Duffy said he’s “very pleased and proud” to have his cartoons featured in Branstad’s book. The book will come out in a limited-edition hardcover version, plus it will be available in paperback and as an e-book on Kindle.

A formal book-release event will be held on December 14, the date when Branstad will surpass former New York Governor George Clinton and become the longest serving governor in United States history. The publisher, though, hopes to release the book prior to that date. Branstad plans a book-signing tour of the state.