You are here: Home / Business / Des Moines building gets $30 million facelift, some artwork airlifted back inside 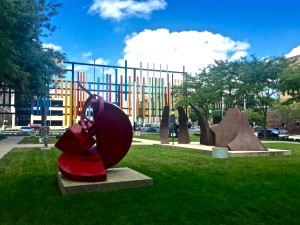 The AEG sculpture garden, located right next to the main building.

For the first time in more than 20 years, hundreds of art fans just had the opportunity to view an Iowa-based insurance company’s valuable collection of paintings and sculpture.

The American Enterprise Group building in downtown Des Moines that houses the private collection is newly-renovated, too.

Architect Rod Kruse says before the updates, the building only had two thermostats and the joke around the office was that employees would experience “all four seasons” inside the building in a single day.

“The biggest task was how do we replace that mechanical system, the duct work, and then put in a contemporary fire protection system, basically a sprinkler system, in a way that, for the most part, nobody knew we were here,” Kruse says.

The building, which was completely gutted, now has a “silver” certification in the Leadership in Energy and Environmental Design or LEED system. The company’s 330 employees as well as the company’s art collection were moved out of the building as crews made the $30 million worth of upgrades. Once renovations were completed, some pieces were too big to fit through the elevators, so cranes had to be used to install the art. Colleen Lange is the company’s chief art docent.

“We did try to allow employees to have some input in the art that was in their personal space, so that’s been fun,” she says. “I’ve been excited to hear employees say: ‘Oh my gosh, I can’t believe I get to have this piece in my space!’ so they’re very excited about it.”

Tom Swank has been the company’s CEO since February.

“If people take a look at this historic building, it’s very iconic, it’s got a lovely art collection, but what they don’t see is the fact that we have a tremendous business and now we have a renovated home to do all of our business in,” he says, “and so I feel very fortunate.” 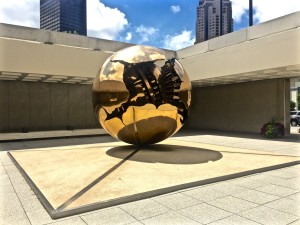 “Sphere within a Sphere” piece by Arnaldo Pomodoro, at the front entrance to the AEG building.

The company has an extensive art collection that ranges from pop art by Andy Warhol to a “sphere within a sphere” sculpture by an Italian artist who has similar pieces in the Vatican and the United Nations.

“Since we’re not yet moved in and we don’t have our files or our systems turned on, it was the perfect opportunity to let people come and experience the collection, see this architectural gem and just get to know us as an entity,” says Medha Johnson, the assistant vice president for human resources at American Enterprise Group.

More than 2,000 people attended the company’s Sunday afternoon open house to see the art and the building. The structure was designed by a famous American architect, Gordon Bunshaft. It has no windows on the east and west sides, but the north and south sides of the eight-story building have floor-to-ceiling windows.