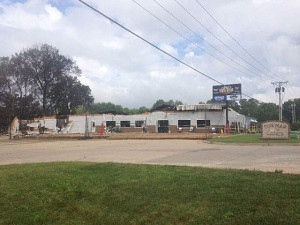 Donmar Lanes in Mt. Vernon was destroyed by fire.

Residents of the eastern Iowa town of Mount Vernon are lamenting the loss of a community gathering spot. The Donmar Lanes bowling alley was destroyed in a massive fire Sunday night.

Longtime Mount Vernon resident Steve Hawtrey was among those who stopped by the burned-out building on Monday. He spoke with KCRG-TV.

“To see it go is heartbreaking,” Hawtrey said. To him, Donmar Lanes wasn’t just a place for league bowling. It’s where he met his wife, who worked the grill part-time, nearly a decade ago.

“It’s just meant a lot to me and my family, and we’ve had kids’ birthday parties here. It’s just a lot of memories,” Hawtrey said. “I can’t express how much sorrow I feel right now.”

“Olin said when they left Olin with their tanker (to go to the scene), they could see the flames from Olin, Iowa. That’s 22 miles away,” Moore said. The cause of the fire remains under investigation. Many people in Mount Vernon are hoping the owners of Donmar Lanes, the Berner family, will rebuild.