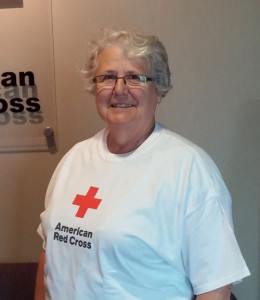 A central Iowa woman on Monday traveled to Saipan, which was blasted by a typhoon last week. Pat Burch of Norwalk is a retired nurse and a trained Red Cross healthcare worker.

As she was waiting to board a flight from Minneapolis to Tokyo, Burch told Radio Iowa she wasn’t entirely sure what work she’d be doing in Saipan.

“I may be working the shelters, where people whose homes are damaged are living, assessing their health conditions…but it could be going out in the community with first aid too,” Burch said. “I really won’t know until I get there.” The 66-year-old Burch is also unsure about where she’ll be staying.

“It could cots in a room or it could be in a hotel room,” Burch said. She’ll be on the island for up to four weeks. The typhoon moved through the region on August 2 and downed trees, destroyed roadways and caused significant flooding.

“There is no power or electricity on the island and gas is rationed, so a lot of this (relief effort) is being done during the daytime. They said we should (prepare) like we’re taking a three to four week primitive camping experience,” Burch said with a laugh. More than 800 homes on Saipan are damaged and officials have said power may not be fully restored to the island for four weeks or longer. The same typhoon is blamed for more than 20 deaths after it slammed into southeastern mainland China and Taiwan.