You are here: Home / Human Interest / Bellevue’s bloody gun battle to be reenacted this weekend 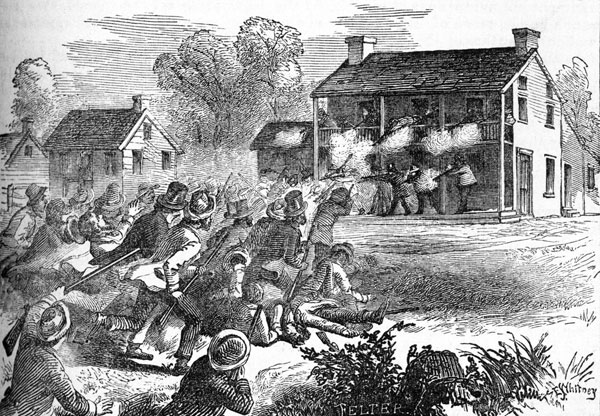 An Old West-style shootout that happened in eastern Iowa before Iowa was even a state will be reenacted and commemorated this coming weekend in Bellevue.

More than a hundred people were involved in the so-called Bellevue War of 1840, as residents banded together and tried to run a gang of outlaws out of town.

About three-dozen descendants of nine of the men involved in the bloody skirmish will be in the Mississippi River town for the events. Local historian and author Susan Lucke says they’ve reserved a hall downtown.

“The descendants will have exhibits in there,” Lucke says. “They’re bringing their family stories and different items. We’re asking the public to come in and experience meeting the descendants and going back in time, and we have events going on.” Those events include a fish fry, a dance and a reenactment of the famed gun battle, with some of the roles being played by the descendants themselves.

Attendees are coming from as close by as Davenport and from as far away as California and Oregon. It’s believed all of the people who will attend are distant relatives of those who fought 175 years ago on the side of the sheriff’s posse.

“We did find one family that’s connected to one of the outlaws who was actually killed, he died the next day after the battle,” Lucke says. “Unfortunately, they can’t make it but he sent some great historical information.”

Dozens of people were injured in the gun battle and seven people were killed: three outlaws and three members of the posse. Then there was Andrew Farley, a farmer from south of Bellevue, who was evidently in the wrong place at the wrong time:

“He was killed by friendly fire,” Lucke says. “He looked like one of the gang. He was dressed in buckskins and was shot when he went out to help one of the gang who was crying for help. Actually, his 4th or 5th-time great-grandson is going to play him in the reenactment.”

One of the descendants who’s making the journey to Iowa from the West Coast says she’ll be bringing what is called a “horse hair memory frame.”

“Years and years ago, people made memories out of people’s hair because they didn’t have photography and she was going to bring that from Oregon,” Lucke says. “One gentleman is bringing — it wasn’t used in the battle, but it’s authentic — an 1839 gun so people can see how big and heavy these were and see why part of the posse was not armed.”

The vigilantes were able to round up most of the outlaws, wanted for murder, counterfeiting, rustling and robbery in cases across the Midwest.

Lucke says the Bellevue War drew national attention, set precedents in frontier justice and ignited more than a century of controversy, as the case is still a subject of study in law schools. Lucke has written a book on the incident: “The Bellevue War: Mandate of Justice or Murder by Mob?”

Admission to Saturday’s events is free.