You are here: Home / Sports / QB change at Iowa not a first for Davis 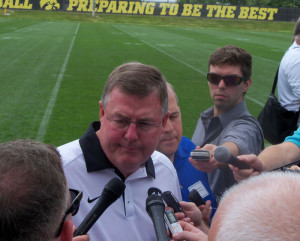 Greg Davis talks with the media.

Unseating a starting quarterback is an unusual move but it is not the first time it has happened for Iowa offensive coordinator Greg Davis.

The Hawkeyes replaced two year starter Jake Rudock with junior C.J. Beathard at the end of last season and Davis says there was a similar situation while he was on the staff at Texas.

“Chris Simms took over for Major Applewhite and Applewhite was Big-12 Player of the Year”, said Davis. Sometimes you go with what you see and part of it is you go with your gut too.”

The Hawkeyes open the season at home against Illinois State on September fifth.