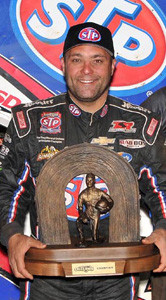 biggest prize begins this evening with the opening night of qualifying.

Since breaking through for his first Nationals’ win in 2006 the Minot, North Dakota, native has captured eight of the last nine crowns and he comes into this week with 22 feature wins this season on the World of Outlaws circuit.

A total of 115 cars have entered the four-day event.