You are here: Home / News / Steve King: “It would be foolish” for Trump to rule out 3rd party run 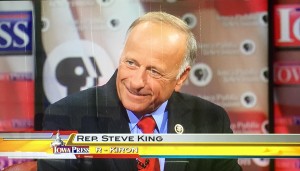 Steve King from this week’s edition of Iowa Press.

Congressman Steve King intends to endorse one of the 17 Republican presidential candidates “sometime later in the fall” and Donald Trump seems to be at or near the top of his list.

“I think it’s fascinating to the world how Donald Trump can continue being Donald Trump and instead of getting weaker, he’s getting stronger,” King said.

A new CNN poll of likely Iowa Caucus-goers shows Trump in first place, with 22 percent support, followed by Ben Carson with 14 percent. It shows how last Thursday’s debate has reshaped the race and how Trump continues to dominate.

“He has a shown a confidence and leadership and he’s been able to step forward and say things that were true,” King said of Trump. “He’s been attacked for these things and they’ve turned out to, many of them, be true.”

“He is his own man. I think he’s well-raised,” King said, with a laugh. “He’s a solid principled, natural, full-spectrum, constitutional conservative.”

And King said that description applies to both his son, Jeff, and to Senator Cruz. In another corner, however, is King’s former chief of staff, Chuck Laudner. Laudner is Donald Trump’s state director.

“(Laudner) mentioned to me just the other day that all of his experience working for me was just perfect preparation for the Trump campaign,” King said, laughing. “…Things get said that people don’t like the way they’re said, but they turn out to be true and we take the attitude that: ‘If you didn’t like that truth, here’s some more of it.”

King has sparked controversy in the past with some of his own comments, like a reference to people crossing into the U.S. along the southern border who had “calves the size of cantalopes” because they were carrying drugs. King said Trump has “tapped into a reservoir” not only fed up Americans, but grassroots GOP activists who are upset with congressional leadership. However, King said some of Trump’s policy positions, including his stand on immigration, are “lacking in detail” and need to be fleshed out in the months to come.

King said his advice next year to Trump would be against running as an independent candidate, but King says “tactically” — at this phase in the campaign — it “is a good position” for Trump to refuse to promise to only run as a Republican.

“Being where he is in the polls, I think it would be foolish for him to rule out a third-party run because of this: he’s at the top of the polls, so why should he be making decisions on what he might do if he doesn’t win the nomination from the Republican Party?” King asked. “Furthermore, some of the efforts on many in the party will be to try to marginalize Donald Trump. Well, if they push him…the fear that he might run as a third-party candidate tends to restrain those who might marginalize him.”

King made his comments this afternoon during taping of the Iowa Public Television program, “Iowa Press” that will air Friday night.