You are here: Home / News / Bush says Iraq was ‘fragile but secure’ when his brother left office 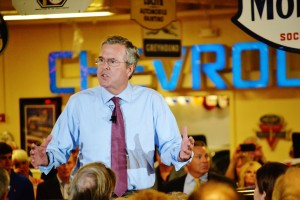 A standing-room-only crowd of about 250 people attended the forum, sponsored by a group called Americans for Peace, Prosperity and Security. Bush told the crowd the “surge” of troops his brother sent to Iraq were effective.

“Mission was accomplished in the way there was security there,” Bush said.

Bush argued you “cannot rewrite history” — and he described Iraq as “fragile but secure” when his brother left office.

“Taking out Saddam Hussein turned out to be a pretty good deal,” Bush said.

Bush delivered a wide-ranging foreign policy address at the Reagan Library earlier this week and during a speech at a party fundraiser in Ankeny tonight he promised to pursue a more offensive strategy in the region than President Obama has.

“If I’m elected president of the United States, we will have a strategy from day one to take ISIS out,” Bush said.

Bush isn’t ruling out the use of “enhanced interrogation techniques” for suspected terrorists. When asked by reporters which techniques he would approve as president to fight terrorism, the former Florida governor said he wouldn’t rule anything in or out at this point.

“I don’t know, I don’t know. I’m just saying, if I’m going to be president of the United States, you take this threat seriously. This is not a law enforcement operation,” Bush said. “These are people who want to destroy Americans’ way of life and they want to destroy western civilization.”

And Bush cast blame on Democratic front-runner Hillary Clinton’s performance as secretary of state, saying a “void” had been created in the Middle East that was being filled by “evildoers.”

Tonight’s event was held in a facility that houses the extensive classic car collection of Dennis Albaugh. Albaugh is one of Iowa’s richest residents.