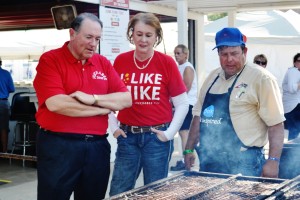 Mike Huckabee and his wife at the “Iowa Pork Tent.”

Former Arkansas Governor Mike Huckabee is the first presidential candidate to visit the 2015 Iowa State Fair. On the fair’s opening day, Huckabee began the morning with a stop to chat with Iowa pork producers flipping chops on their big State Fair grill.

That’s the tag line for pork industry ads encouraging people to eat “the other white meat.” The pork chop grill is a rite of passage for presidential candidates and Huckabee is the first of the lot to stop this year. Huckabee told Radio Iowa he is the grillmaster in his family.

Huckabee kept up the lighthearted banter as he spoke late this morning during a 20-minute appearance on The Des Moines Register’s Political Soapbox.

“Let me begin with a recommendation: pork chop on stick,” Huckabee said. “Trust me. It’s what’s for breakfast, lunch, dinner and snack.”

But Huckabee quickly sent a barb Hillary Clinton’s way, focused on her use of a private email server while she was secretary of state. 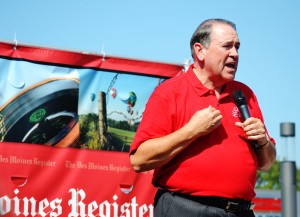 “This time 17 Republicans are coming to Iowa to ask for your vote and support in the Caucuses. There’ll be a handful of Democrats who will come as well. Hillary probably is not going to come. She’ll email in her appearances,” Huckabee said, getting laughter from the crowd.

Huckabee delivered remarks for about 12 minutes, then took questions from the crowd for the rest of his 20-minute time allotment on The Register’s stage.

“This is called ‘Q-and-A’. That means ‘questions and answers’ in your world, but for me, it’s ‘questions and avoidance’. You ask questions. I will try not to do anything that will end my presidential aspirations here today at the Soapbox,” Huckabee joked.

The first question from the crowd: How do we get the economy back to a four or five percent growth rate? Huckabee touted his “Fair Tax” proposal that would get rid of the federal income tax and replace it with a sales tax.

“I believe we can get it to six or higher with the Fair Tax,” Huckabee said. “Here’s why: $11 trillion of capital is parked off shore. I guarantee you we will goose the economy if you bring $11 or $12 trillion of working capital back to this country.”

Later on the fairgrounds, Huckabee was swarmed by a throng of media.

“How important is the fair to presidential politics?” Cynthia Fodor of KCCI TV asked.

Huckabee said: “I’ll tell you in February,” and laughed.

Huckabee told reporters that not only had he eaten a pork chop on a stick this morning, he was leaving the fair with a box of chops, although Huckabee did not reveal who would get to eat those chops. Huckabee’s wife was along for the fair visit today and he referred to her as the “enforcer” of the limited options in his new diet. Huckabee assured reporters, though, that protein-laded pork chops are “definitely” on that diet.