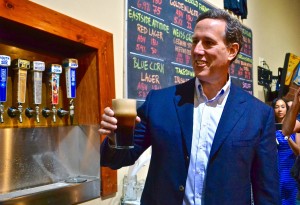 Rick Santorum at the Confluence Brewery.

Republican presidential candidate Rick Santorum says the fact that Hillary Clinton withheld her private email server until now is “a further indictment of her character.”

“If there’s anything I would think that the American public should be suspicious of, it is a person in America who thinks that they are above the law, being in a position where they actually enforce the law,” Santorum says.

Clinton’s spokesperson announced early Tuesday that Clinton’s private email server, as well as a thumb drive with copies of all of her emails, would be turned over to the Justice Department. Santorum says this is more evidence Clinton thinks “rules don’t apply to her.”

“There are people who have been prosecuted because they did such things, and she shouldn’t be treated any differently than anybody else,” he says.

Last night, Santorum spoke to a group of about 35 people around a table at the Confluence Brewery in Des Moines, while drinking a glass of Irish stout beer. Santorum will continue his current campaign tour in Iowa through Saturday night. He will speak at a HyVee in Chariton this morning and will hold a town hall meeting at a manufacturer in Ottumwa in this afternoon. Three other Republican presidential candidates are holding events in Iowa today. Jeb Bush will speak at a foreign policy forum in Davenport early this afternoon. Carly Fiorina will be at a town hall meeting in Alden early this evening and Mike Huckabee will appear at the State Fair later this morning.