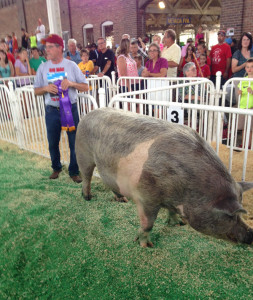 Hundreds crowded around a show ring in the State Fair’s hog barn Thursday to see the “big boar” competition.

“He weighs 1,166 pounds,” the master of ceremonies announced and the crowd erupted in cheers. “He is your champion big boar.”

The big pig’s name is “Big Mac” and he was raised by Tom McDonald of Ryan, Iowa.

“The trick is to find the big-framed pig…to carry almost 1200 pounds of weight there,” McDonald told reporters after the win.

Big Mac is three years old. So how did he bulk up?

“His favorite food is Ding Dongs, Captain Crunch and he has a 30-pack of Busch Light every day,” the event’s emcee said, and the crowd laughed.

Big Mac’s owner was asked if that’s his diet or the hog’s.

“It’s a combination of both,” McDonald said, with a laugh. “They say: ‘Never drink alone.'”

The boar, though, eats as much as 20 pounds at a time and most of his rations were corn and beans rather than cupcakes and beer. The boar was cast before the crowd as an animal seeking to make his mark on the political scene.

“His goal in life is someday to go to the White House and inspire Michelle (Obama) to promote bacon-on-bacon sandwiches for all school kids’ lunches,” the emcee said, to cheers and applause from the crowd.

There was another political joke, about the pig’s alleged love of the card game Euchre and the boar’s preference when playing that game to have “Trump”.

This is the second year “Big Mac” competed in the Iowa State Fair’s “Big Boar” competition. He came in second last year, but since he’s won in 2015 the hog can never compete again at the Iowa Fair. McDonald is hoping Big Mac gets an invitation to compete in the Texas State Fair in late September.