You are here: Home / News / Bush: ‘I campaign the way that I would govern’ 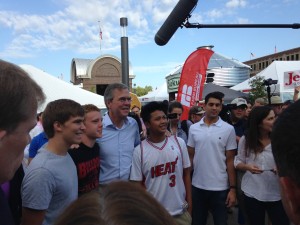 “I think it’s fun. I’ve not done this before, so I think it’s fun and I’ve been listening on TV to what they all have to say,” Tempel said, “so hopefully I’ll make the right choice.”

Deb Beach of Oskaloosa was walking right alongside Tempel, trailing at the media throng, and she described the experience as both fun and crazy.

“I’ve never been around a big crowd like this, so it’s fun,” she says.

Dave Dejongoa of Charles City came to the fair to watch his buddy show pigs at the fair and happened to wear a Miami Heat shirt. Bush saw it and posed for a picture with Dejongoa and his two teenage buddies.

“He’s pretty awesome,” Dejongoa said after the photo was snapped. “I like him.”

Bush drew a huge crowd for his appearance on The Des Moines Register’s Political Soapbox at the fair.

“Put aside your ideology,” Bush said. “I hope you want a president who will roll up his sleeves and fix these broken systems, for crying out loud, to make sure that we serve the people.”

Without mentioning Hillary Clinton by name, Bush jabbed at Hillary Clinton’s use of a personal email server when she was secretary of state, as well as her campaign’s attempt to corral the media.

“I campaign the way that I would govern,” Bush said. “No rope lines, totally out in the open.” 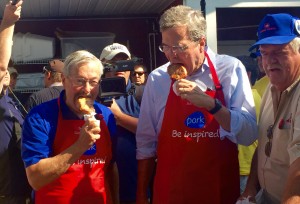 Jeb Bush and Terry Branstad eating “pork on a stick.”

Bush spoke for about nine minutes on the “soapbox” at the fair, then he took 11 questions from the crowd. As he was answering one question on education policy, Bush could sense a man in the crowd was anxious to get his question in.

When his turn came, the man said the U.S. was getting “more involved” in Iraq and the two soon quarreled about whether U.S. troops should have been withdrawn from Iraq in 2011.

The man yelled back. “(George) Bush signed the deal!”

The man kept yelling and Bush kept talking forcefully over him.

“Now we need to do something else which is to deal with the fact that we have Islamic terrorists organized as a caliphate and the way that you take them out is to rebuild the Iraqi military, provide arms and support for the Kurdish Peshmerga, to re-engage with the Sunnis,” Bush said, “to be able to have a strategy to take them out.”

Bush met with each of Iowa’s top Republican office-holders during his tour of the fair. Both U.S. Senators Chuck Grassley and Joni Ernst, Governor Terry Branstad and Ag Secretary Bill Northey. Bush and Branstad went to the pork producer’s grill. After flipping some chops, they bit into chops at the same time — and the moment was captured by photographers.