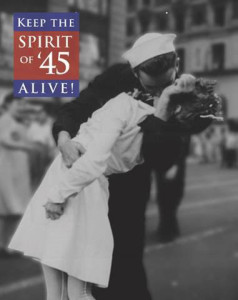 World War Two ended on this date in 1945 and a celebration is planned Sunday at the Iowa Veterans Cemetery near Van Meter. Iowa Department of Veterans Affairs executive director, Colonel Robert King, says the “Spirit of ’45” ceremony is part of an international event.

“All of the national cemeteries, including Arlington, many state cemeteries, all of the American battlefield memorial commission sites around the world will participate in this international to recognize our World War Two veterans on this 70th anniversary of what they did for us,” King says.

The Iowa event begins at 1 p.m. and Governor Terry Branstad will be the keynote speaker. King says they will also have an Iowan who is the national spokesman for the “Spirit of ’45” events.

“Captain Jerry Yellin from Fairfield, was originally from the east coast, came back and settled in Iowa. Jerry was a P-51 fighter pilot and was flying combat missions on the very last day of the war,” King says. Yellin’s flight is considered the last mission of the war. He is now 95-years-old. King is retired from the Iowa National Guard and says they will also have a flyover with a special plane. It’s a World War Two Stinson plane that was used by the Army Air Force during the war and it was later assigned to the Iowa Air National Guard in 1947.

King says this is a chance for everyone to remember one of the great days in history. King says the people that were alive on that date 70 years ago is diminishing every day. “But there’s a lot of stories and a lot of remembrances not only of that last, but what they specifically did during the war,” according to King, “whether it was in combat, or participating in one of the many drives that supported the war effort.”

King encourages everyone to participate in the celebration and share in the stories and memories. The Iowa Veterans Cemetery is along Interstate 80 at the Van Meter exit.