You are here: Home / Agriculture / John Deere workers among those injured in China explosion 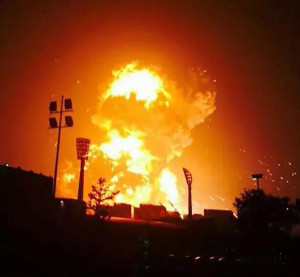 Employees from John Deere were among those injured in an explosion in China.

There’s chaos at the scene of a massive explosion and fire in China that took place near a John Deere factory. There were actually two explosions at the chemical warehouse, with Chinese media reporting the second blast was much larger that the first, the equivalent of more than 20 tons of TNT.

Pictures from the densely-populated city of Tianjin show multiple apartment buildings near the warehouse heavily damaged. An official with John Deere at the headquarters in the Quad Cities says several Deere employees are among the estimated 700 injured, some of them critically, though he couldn’t say whether any Deere workers were among the 50-some confirmed dead.

Operations at the Deere factory in Tianjin are temporarily suspended.