You are here: Home / News / Clinton, then Trump and Sanders hit the Iowa State Fairgrounds (AUDIO) 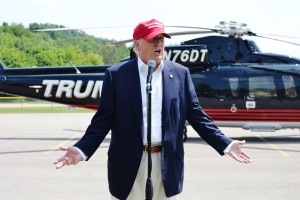 Donald Trump answers questions from reporters after arriving in his helicopter.

Three high-profile presidential candidates competed for a blue ribbon in the competition for the attention of Iowa State Fairgoers today. Donald Trump flew his helicopter over the fairgrounds several times and one pass-over came as Bernie Sanders was speaking to a huge crowd at The Des Moines Register’s Political Soapbox.

“Well, there’s Donald Trump. What could we do?” Sanders said as he stopped mid-speech to acknowledge the fly-over.

Some in the crowd booed, then a chant of “Bernie! Bernie!” sprung up.

“You know, I apologize,” Sanders continued. We left the helicopter at home. It’s in the garage. Forgot to bring it.” 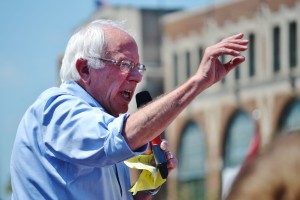 Sanders gave a 17-minute stump speech and did not take questions from his supporters, many of whom had been waiting in the sun for over an hour to see and cheer Sanders.

“I want to thank the people of Iowa for their courage in voting for Obama in 2008 and what you showed is that a state which is mostly white could go beyond the color of a candidate’s skin and vote for somebody based on their character and their ideas,” Sanders said, to cheers. “Thank you, Iowa.”

AUDIO of Sanders on The Des Moines Register’s Political Soapbox

Hillary Clinton was the first to arrive on the fairgrounds, flanked by former Senator Tom Harkin who is publicly backing her candidacy.

Harkin’s connection to Clinton goes back a quarter of a century. Harkin endorsed Bill Clinton in 1992 after dropping out of the presidential race. 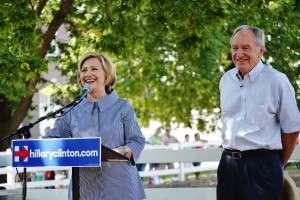 Hillary Clinton and Tom Harkin at the Iowa State Fair.

“It’s a special moment here at the Fair to receive your personal endorsement,” Clinton said. “I look forward to working with you not only during the campaign, but I hope to be able to call upon you for counsel, advice and maybe get you back into the arena from time to time.”

AUDIO of the last part of news conference

Clinton and Harkin, standing under a tree near the fair’s livestock show ring, then answered questions from a throng of surrounding media. Clinton brushed aside any suggestion there is concern among Democrats about her use of a private email server while she was secretary of state.

Trump landed his helicopter near the fairgrounds, on a parking lot adjacent to a baseball diamond.

“Does anybody want to take a ride?” Trump asked a crowd of kids and their parents who surrounded him after the helicopter landed.

Before Trump took the kids back up, though, he answered reporters’ quetions on a variety of topics first, promising the Trump plan for addressing the immigration issue will be released Sunday morning on NBC’s Meet The Press.

“I’m putting a tax policy paper over the next two weeks, so we’re putting them out one-by-one,” Trump said.

But Trump also downplayed the idea he needs to get more specific — and he pointed to the most recent poll in Iowa which shows he’s leading the pack of Republican presidential candidates here.

“I don’t think I’ve made mistakes,” Trump said. “I mean, every time somebody says I made a mistake, they do the polls and my numbers go up, so I guess I haven’t made any mistakes…I’m sure I will at some point, but so far you have to say it hasn’t worked out badly. Right?”