You are here: Home / Agriculture / Iowa State Extension field day to include information on drones 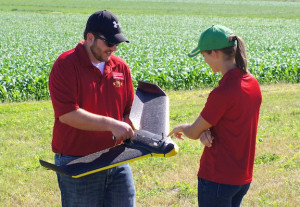 ISU researchers look over a drone.

An Iowa State University field day at the end of this month will feature a discussion on using Unmanned Aerial Vehicles on the farm. Ryan Bergman in the ISU’s Department of Ag and Biosystems Engineering is the organizer of the field day.

He says the UAV’s can be another tool used by growers. “There’s still a lot of unknowns in the area of UAV’s and aerial imagery specifically in the agriculture sector,” Bergman says. “And so a lot of what we are going to be showing at the field day, and a lot of the research that my team is doing here at Iowa State is focused around how do we utilize this imagery to help us make better management decisions for our operations and allow us to cost-effectively utilities this new tool.”

Bergman says the images from the drones can turn up many issues in the fields. “We can tell a lot of differences across the field, compaction issues show up relatively well in a lot of aerial images, drainage issues show up extremely well. Those are some of the early things that we are seeing, but we think there a lot of other uses that we can employ aerial imagery in down the road,” according toe Bergman.

While the drones are a new tool to get information on your crops, Bergman says its just one piece of the puzzle. “Whatever you are see in the imagery — at this point we aren’t recommending that you can make a management decision of that really — unless you can verify it on the ground what’s happening. It’s completely visual, so there can be a lot of times be other factors that are affecting that image and it may not be due to the crop,” Bergman says. He says growers will still have to do some leg work once they find potential issues in the images from a drone.

“That’s one thing that we’ve really been stressing — if you see something in the image that should tell you where in the field you should look — and then you go out there and look. And based on what you are seeing in the field based on the image, then you can make a decision off of that,” Bergman explains. An attorney with the Center for Agricultural Law and Taxation at Iowa State will also be on hand for a discussion on the legal issues surrounding UAV’s.

“That’s still kind of a gray area right now, and so that’s why we have her coming to kind of talk through some of those issues with the growers,” Bergman says. The field day is August 27th at the ISU research farm located near Boone on Highway 30. The field day starts at 8:30 and is free to the public.