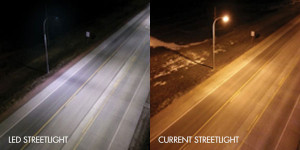 The state’s largest supplier of power is undertaking a project that will brighten up streets in hundreds of Iowa cities and towns. Ashton Newman is a spokesperson for MidAmerican Energy Company.

“We’re going to be replacing more than 100,000 of our streetlights and converting those to LED over the next 10 years,” Newman said. The conversion to Light Emitting Diode units won’t be happening in all Iowa towns covered by MidAmerican’s service territory.

“There are still streetlights that are owned by cities and not MidAmerican Energy, so those are not part of the project,” Newman said. In areas where the streetlights are changed, those cities are expected to save energy and money. “The important thing about LEDs is that they consume approximately 35 to 50 percent less energy, depending on their type and size, than the typical High Pressure Sodium streetlights that exist today,” Newman said.

The conversion project will be paid for by MidAmerican Energy, with no cost to municipalities unless they opt for an accelerated installation plan. MidAmerican Energy’s service territory includes the cities of Des Moines, Sioux City, Sioux Falls, Council Bluffs, Waterloo, Iowa City and the Quad Cities.