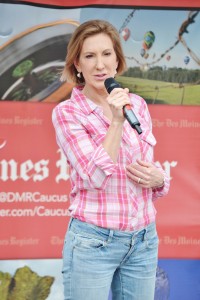 “I believe that minimum wage should be a state decision, not a federal decision,” Fiorina said, to applause from a crowd at the Iowa State Fair. “Why? Because it makes no sense to say that the minimum wage in New York City is the same as in Mason City, Iowa.”

Fiorina is the latest candidate to take a 20-minute turn on The Des Moines Register’s Political Soapbox at the state fair and she used nearly all of that time to take questions from the crowd. The minimum wage was the first subject raised.

Fiorina, the former chief of computer giant Hewlett Packard, pledged to both reduce the size of government and make it run more efficiently.

“It is a stain on our nation’s honor that the VA has been broken for 20 years,” Fiorina said. “The professional political class in Washington, D.C. talks a lot about fixin’ a lot of things, but somehow they have never fixed that.”

Fiorina fielded seven questions and drew cheers from the crowd when she denounced Planned Parenthood. Fiorina also touted the idea of simplifying the federal tax code, making it just three pages long, as a “way to curb the power of the wealthy and well-connected.”