You are here: Home / News / Hot weather and rain causes spike in algae on lakes 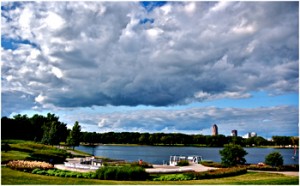 You may’ve seen a lot of greenish scum floating on the water during your visit to a state beach.

The coordinator of the state beach testing program for the Iowa Department of Natural Resources, Mary Skopec, says they’ve seen a spike in blue-green algae in recent tests. She says it continues a trend they’ve seen through this summer.

“This year we’ve actually seen a record number of the algal toxin warnings, so in 2010 up until 2015, we’ve seen a steady increase. This year we’ve hit 25 warnings, and we still have three weeks of monitoring left to go,” Skopec says. Some heavy rains have been part of the reason for the increase in algae blooms. “I think what we’re seeing is really hot weather and the blue-green algae love that hot weather. They also love the nutrients that the rain has washed into lakes,” Skopec says. “So, it’s sort of a combination of all the factors that they love the best happening right now in Iowa.”

Skopec says the algae will go away once the weather changes. “The blue-green blooms will start to take care of themselves once the weather gets colder, once we start to see the rains return in the fall. Generally the bacteria get mixed in and we don’t see the blooms late in September and October like we do early in the season, say in August,” according to Skopec. ” By November the blooms will be pretty much gone before the ice forms. So, they will take care of themselves.”

Until the blooms start to go away, you should be on the lookout for beaches that have posted warnings. “Just be alert for those blooms to make sure you are not swimming in the really green, scummy-looking water,” she says. The state monitoring program will end after Labor Day, but it may still be warm enough for people to use the beaches and swim. Skopec says you should keep an eye out for the green-colored water, even if there is not a sign posted. And she says you should be careful with your pets in the water.

“I think we haven’t talked enough about pets in the green water. They are very sensitive to the blue-green algae toxins — so try to avoid that for recreation, wherever you are in the state. You can find the results of the state beach monitoring on the DNR’s website.