You are here: Home / News / Immigration flares as issue for candidates at State Fair 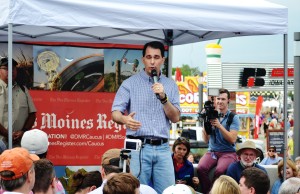 Three Republican presidential candidates faced questions about immigration policy from the media and from today’s crowd at the Iowa State Fair. Wisconsin Governor Scott Walker was the first to speak today from The Des Moines Register’s Political Soapbox. When someone in the crowd asked Walker about immigration, Walker said the U.S. needs to build a “wall” along the southern border and end “sanctuary cities” where deportation orders are not followed.

“My great-great grandfather came as an immigrant from south central Wales. His father was a miner. He became a blacksmith and eventually moved his way to the Midwest, but like so many others they came in and followed the legal path,” Walker said. “I don’t believe in amnesty.”

Walker has said his approach to immigration is similar to that of Donald Trump, the new frontrunner in Iowa polls. Trump this weekend called for deporting all those who entered the country illegally and Trump would end “birthright citizenship”. During a news conference on the fairgrounds, Walker was asked three times whether the children of undocumented immigrants who were born in the U.S. should be deported.

“I’ve said in terms of what we should do is enforce the law,” Walker said. “If we enforce the law, we’re not going to have that problem going forward. A lot of people in the media here and elsewhere want to talk about several steps down the way, but until we secure the border and start enforcing the laws, we can’t talk about other things.” 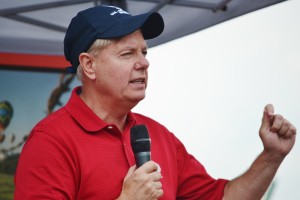 Lindsey Graham speaking to a crowd of supporters at the Soap Box.

“Hispanics — we’re driving them away folks because of the way we’re talking about fixing a hard problem like immigration,” Graham said.

“I think it’s gibberish,” Graham said. “I don’t think there’s 10 votes in the United States Senate for this plan. It makes no sense.”

Graham also dismissed Trump’s idea of getting the Mexican government to pay for construction of a wall along the southern border.

“We might as well just go ahead and hand Hillary Clinton the keys to the White House and over my dead body will I let that happen to our party,” Graham said. 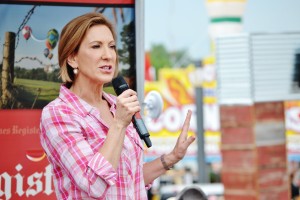 Carly Fiorina, another GOP candidate who appeared at the fair today, told reporters it was “completely unrealistic” to get Mexico to pay for the wall.

“Donald Trump has part of it right,” Fiorina said. “There’s no question we should be defunding sanctuary cities if they won’t enforce the laws.”

Fiorina said the focus should be on fixing the legal immigration system and securing the border.

“There are loads of ideas about how to get it fixed and yet, somehow, it never gets done,” Fiorina said. “I’ll get it done.”

Fiorina is among the 14 presidential candidates from both parties who have walked the fairgrounds during the first five days of the 2015 Iowa State Fair. About half a dozen more will visit before the fair ends Sunday.