You are here: Home / News / Branstad: It’s up to attorney general to determine if Planned Parenthood broke laws 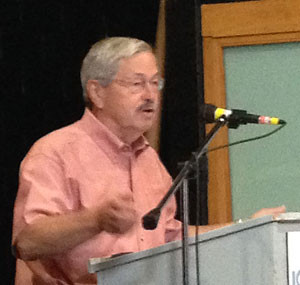 Governor Terry Branstad says it’s “the responsibility” of Iowa’s Democratic attorney general to determine if Planned Parenthood of the Heartland is prosecuted for “any criminal wrong-doing.”

Critics of the organization have called on Iowa’s Republican governor to launch a criminal investigation of Planned Parenthood after a series of undercover videos were released.

“These are videos from other states, so we don’t know if this has happened in Iowa, but this is a national organization,” Branstad told reporters Monday.

As Radio Iowa reported on August 6, Branstad is having officials in the Department of Human Services review federal family planning grants the state administers to see if any state dollars are being used on contraceptives provided by Planned Parenthood.

“We’re going to look at the contracts and see what our rights and responsibilities are,” Branstad said Monday at his weekly news conference. “But I want to protect the taxpayers.”

No state taxpayer dollars are paying for abortions in Iowa. This past Saturday hundreds of abortion opponents rallied at the statehouse to call attention to the undercover videos. Branstad spoke at the gathering.