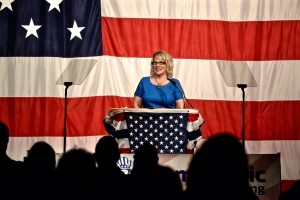 Two Democratic candidates have emerged as potential challengers to two of Iowa’s Republican congressmen. Kim Weaver of Sheldon — the chairwoman of the O’Brien County Democratic Party — hopes to be the Democratic nominee to challenge Republican Congressman Steve King in 2016.

“Every day we wake up to have one of the most ineffective and offensive members of congress representing us in Washington,” Weaver said.

Weaver announced her candidacy this past weekend during the Iowa Wing Ding in Clear Lake where more than 2000 Democrats cheered her on — and booed King.

“Hardly a week goes by without him making some kind of derogatory comment and this has to stop,” Weaver said.

Weaver supports raising the minimum wage, opposes “privatizing” Social Security and Medicare and she described herself as “strongly pro-choice.”

“I believe that women should determine their health care and not have it dictated to them by Steve King,” she said.

Weaver, a Des Moines native, has lived in Sheldon for the past 24 years. She’s a single mom with two children in college and another who’s a graduate of MIT. She is a long-term care ombudsman who travels in 15 counties in northwest Iowa for her job. The fourth congressional district has a Republican voter registration edge. King plans to seek reelection in 2016 to an eighth term in congress. He defeated Democrat Jim Mowrer in the 2014 election.

Mowrer, who is now vice chair of the Iowa Democratic Party, has moved to Des Moines and announced on Monday that he would run again for congress, but in the third district. The seat is currently held by first-term Republican David Young of Van Meter.

Mowrer will face a primary. In July, Democrat Desmund Adams of West Des Moines announced he would run in the third district. Adams was an unsuccessful candidate for a state senate seat in 2012.