You are here: Home / News / Kasich: ‘One party can’t do it all’ because politics requires ‘teamwork’ (AUDIO) 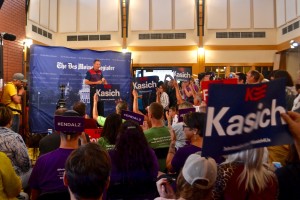 John Kasich at the Des Moines Register’s Soap Box, which was moved inside because of the rain.

Republican presidential candidate John Kasich stressed “the value of teamwork” during an appearance at the Iowa State Fair today.

“You want to fix the fence, you want to deal with immigration, you want to balance a budget, you want to deal with entitlements, you want to do any of those things, you’ve got to do it as a team. One party can’t do it all because while we may be Republicans and Democrats, liberals and conservatives, above all we’re Americans,” Kasich said. “This is not a game we play in public life. The purpose of it is to give people an opportunity to be lifted.”

Kasich, the governor of Ohio, touted his 18-year career in congress which culminated with a balanced federal budget.

“This notion that government can’t work is baloney,” Kasich said. “Just treat it like a business. Fix it.”

AUDIO of Kasich’s appearance at the state fair

Kasich told the crowd of his start in politics which involved a letter to President Nixon and a visit to the Oval Office and Kasich said he feels “an obligation” to use his God-given skills in the political realm.

“When people say, ‘What about these other candidates?…I do want to thank Donald Trump because he got 24 million people to watch the debate. That was good,” Kasich said, and the audience laughed. “But you know why don’t we just as people running for office or holding office commit ourselves to doing the right thing?” 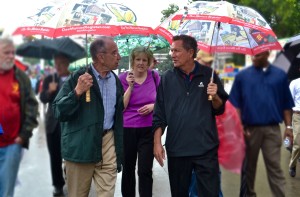 Trump’s release of a six-page immigration plan on Sunday has put the issue at the fore during candidate appearanace at the fair. Kasich told reporters he hasn’t seen Trump’s plan, but agrees that the wall along the southern border should be finished.

“All the fighting and yelling and screaming and ideology and partisanship means the wall doesn’t go up, so more people come in,” Kasich said. “I think what I’m talking about is something that can unite.”

Kasich has been expressing support for a guest worker program as well as a path to legalization for undocumented immigrants who have not committed crimes.

Kasich was the second candidate to speak on The Des Moines Register’s Political Soapbox today. The crowd gathered to hear Marco Rubio this morning was drenched by a downpour and as rain continued in the afternoon on the fairgrounds, organizers moved Kasich’s appearance indoors. Then, the sun came out at about the same time Kasich took the microphone inside.