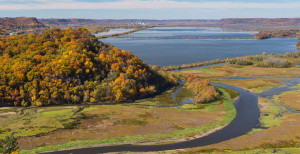 National Geographic wants to put attractions along the Mississippi River on the world map. Nat-Geo is building an on-line interactive map of things to do, places to go and stay, and activities to help people plan trips along the Mighty Miss.

The international magazine’s Jim Dion was in Clinton recently to outline what they are looking for and how to nominate content for the website.

“We want to share that opportunity for how to travel along the river with people from around the globe,” Dion says. Dion is traveling the upper Mississippi River region in an outreach effort. The interactive map will include the area from the river’s headwaters to the Gulf Of Mexico. He says the Mississippi is one the best-known regions internationally.

“I just finished a project in Sri Lanka and if I walked down a street in Columbo and asked someone of they’d ever heard of the Mississippi, they’d probably say yes,” Dion says. “Maybe they don’t know the entire context of it but if you think of the great river systems in the world, the Danube, the Amazon, the Ganges, the Mississippi, everyone here has heard of those other three rivers.”

While the Mississippi is already popular, Dion says it could attract even more visitors from around the world. “We have an opportunity here to use that recognition, that concept of the Mississippi, this river system that really defined the future of America, where the South met the North and created the West,” Dion says. “It is the story, if we go from the headwaters down to New Orleans, of our cultural diversity, our biological diversity and all that we are.”

Dion is talking to those involved in various attractions along the waterway to encourage their participation in the project. “Telling the story of America and visiting that story of America can be experienced along the Mississippi,” he says, “from the food, drink, music, places you can go, things you can do along the river, learn about who we are and what’s so special about our place.”

The National Geographic representative says the map will include about one county on each side of the river from the headwaters in Minnesota to the Delta Region of Louisiana. The map is live now and new items are being added on a regular basis. Dion says National Geographic has many other interactive maps to areas around the world.