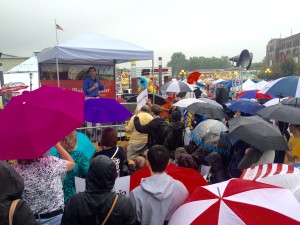 Marco Rubio speaking at the Soap Box under the pouring rain.

Republican presidential candidate Marco Rubio campaigned at the Iowa State Fair today, joking the rainy weather reminds him of his hometown of Miami.

“Thanks for braving the rain,” Rubio told a crowd at The Des Moines Register’s Political Soap Box. “I’m going to cut it a little shorter than normal, because they say there’s another band (of rain) coming through and I don’t want anyone to get all wet, but probably too late for that, right?”

The rain poured before, during and after Rubio’s remarks, which lasted about nine minutes. Rubio briefly outlined his biography, talked about modernizing higher education and called for repealing and replacing “ObamaCare” health insurance subsidies with “pre-tax” health savings accounts.

“I’m asking you to Caucus for me,” Rubio said. “On February 1 in this state, we will begin the process of selecting the next American president…The question is what comes next for America and what comes next, if we’re willing to do what must be done, is the greatest era in our history.”

Earlier this morning Rubio held a news conference in a picnic shelter on the fairgrounds, telling reporters he does “not agree” with rival Donald Trump’s call to end “birthright citizenship” for children of immigrants who are born in the U.S.

“I’m open to doing things that prevent people who are deliberately coming to the U.S. for purposes of taking advantage of the 14th Amendment, but I’m not in favor of repealing it,” Rubio said. “I haven’t read his plan. I’ve only read press accounts…Obviously there are some ideas that have merit, but the majority of it is really not a workable plan that could ever pass congress.” 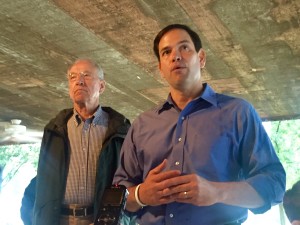 Chuck Grassley and Marco Rubio at the Iowa State Fair.

Senator Chuck Grassley escorted Rubio into the fairgrounds and Grassley told reporters he wants answers as to why Hillary Clinton’s private attorney had the computer server she used to send email while she was secretary of state. Rubio said even things that aren’t classified could be sensitive and useful to foreign intelligence agencies.

“So it is concerning,” Rubio said of Clinton’s use of a personal email account. “I think it shows quite frankly incompetence, on her part, to not know that this was important information she needed to protect and to be clear to her staff, if that’s who it was, not to be sending that information on an open, private server.”

Rubio has said he aims to win the Iowa Caucuses, but he has not dedicated many campaign resources to the state and he last visited Iowa a month ago.

“We don’t run to finish in second or third place anywhere,” Rubio said, as the rain poured on the roof. “Obviously these are complicated processes, but we love coming to the state.”

Rubio told reporters he not only has his senate “duties” to attend to in Washington, D.C., but he’s been spending time raising money and campaigning elsewhere. Rubio and his family visited the fair Monday evening — before the storm front moved in — and he rode the bumper cars with his kids. In 2007, then-Senator Barack Obama did the same thing with his girls and the next day Obama joked that riding the bumper cars was good preparation for a candidate debate. Rubio joked about the experience, too.

“There aren’t enough bumper cars to prepare for this debate,” Rubio said. “There’s too many Republicans running. One out of five Republicans it seems these days.”

Despite the heavy rain, a crowd had gathered to hear Rubio speak this morning clad in rain gear, standing under an umbrella or simply getting drenched.

“A special welcome to all of you,” Carol Hunter, The Register’s news director told the crowd, “because you must truly to interested in presidential politics to be out today.”

AUDIO of Rubio’s speech at the fair