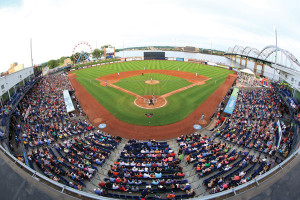 The Quad Cities River Bandits are one of the reasons the Quad Cities ranks as the top minor league market in the Sports Business Jounal.

The Quad Cities is now ranked the number-one minor league sports market in the country, according to the Sports Business Journal.

Joe Taylor is president and CEO of the Quad Cities Convention and Visitors Bureau and he chairs the Quad Cities Sports Commission. Taylor says the teams scored well in every facet of the Sports Business Journal study. “The fans continue to come to the games, the facilities are constantly updated, and the clubs each have a long tenure,” Taylor says. “It’s the perfect combination for our study.”

Dave Heller, owner of the River Bandits, notes that four years ago, the Quad Cities ranked 86th on the list, while two years ago, they’d moved up to 48th. Now, to be number-one is a huge achievement. “We are so humbled by this and we are so grateful to the people of this community for supporting us so strongly,” Heller says. “This is not a River Bandits award. It’s not a Mallards award. It’s a Quad Cities award.” The Convention and Visitors Bureau says more than half of all hotel room nights in the Quad Cities can be attributed to these two teams and other local sporting events.

Des Moines placed at number 6 on the list this year. Other cities in the top ten include: Tulsa, Fort Wayne, Toledo, Charleston, Sioux Falls and Grand Rapids.