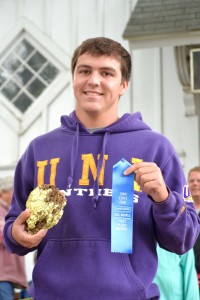 “Sometimes you’ve just got to know when to let the crap fly,” Adam said.

Adam, a 19-year-old who threw the discus in high school track, didn’t really practice his throw, but wound up tossing his cow chip 115 feet for the win.

“Underhand was my strategy, kind of just get it up, let the wind do its thing and hope for the best,” Adam said. “That’s pretty much all I had coming into it.”

The women’s competition followed the men’s cow chip throwing spectacle and Bev Williams was taking notes as she watched the other gender go through the motions, to come up with her own tossing strategy. 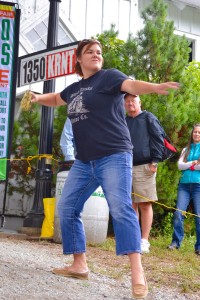 Bobby Andreason of Des Moines did think about whether she would be handling the cow chip with her bare hands, but decided she could wash her hands afterwards.

“I didn’t bring any gloves with me or anything so I think I’m just going to have to throw it and hope for the best,” Andreason said.

When she got to the starting line, Andreason unfortunately threw her chunk of gunk out of bounds.

Each winner was given a fudge pie, crafted in the shape of a cowpie. All top 10 finishers in the men’s, women’s, children’s and VIP divisions were given ribbons, too.

(This post was updated at 4:57 p.m. with additional information)