You are here: Home / Fires/Accidents/Disasters / Drivers in U-I study don’t understand technology used in their cars 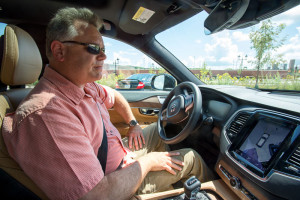 A University of Iowa study finds many drivers don’t fully understand the life-saving technologies that are built into their own vehicles.

Dan McGehee, director of the U-I’s Transportation and Vehicle Safety Research Division, says he was surprised at the findings, which indicate many people are uncertain about safety features that have been standard on most cars for a generation.

“Some of the technologies, like anti-lock braking systems (ABS) or tire pressure monitoring systems, were something that we found people didn’t really understand,” McGehee says, “and ABS has been around for more than 20 years.”

“Every manufacturer has a different scale in terms of these little bars that show up in different colors,” McGehee says. “Some have predictive tracks of where you’re going to back up. The early days of the back-up camera, it was just that, but now, there are different features being added on there.” Back-up cameras can also be fouled by dirt or blinded by direct sunlight.

Other features studied include: blind spot monitors, forward collision warning systems and traction control. McGehee says the study made it clear, there’s a “tremendous need” to improve consumer understanding of critical safety features. The U-I is partnering with the National Safety Council to launch “My Car Does What,” a national campaign aimed at educating consumers about safety technologies and how they work.

“MyCarDoesWhat.org is really a website that we put together to help educate the drivers and consumers out there about all the different, fantastic life-saving technologies that are coming out on cars,” McGehee says. “The survey was really a way for us to identify what features we should concentrate on.” The website includes educational videos and other information about safety features that help drivers avoid or reduce the severity of a crash. It’s part of a larger national education campaign set to launch this fall.