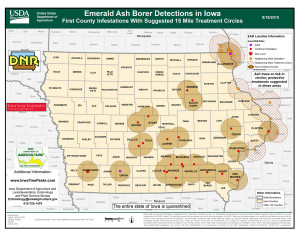 The Iowa Department of Agriculture and DNR have confirmed that Montgomery County is the 27th of Iowa’s 99 to be confirmed with an emerald ash borer (EAB) infestation.

It’s not news that invasive beetle continues to spread, but Ag Department EAB coordinator Mike Kintner says this is the farthest west the bug has been discovered. And he says the movement appears to be faster than what would normally be expected.

“There’s been a significant amount of detections down there along Highway 34. And of course that travels right through Red Oak, so you could kind of make the assumption that some this is attributed to human assisted movement — if not all of it at this point in time at least for those large jumps,” Kintner says. He says the emerald ash borer moves very slowly on its own, and the quarantines on the movement of firewood and other wood products have been designed to prevent that movement from picking up the pace.

“It’s a shame that it moved that far west, a lot of the finds have been in the eastern half of the state. But that time was bound to come,” Kintner says. Kintner says EAB has taken a back seat to other concerns this summer, but he says everyone should still remember that moving firewood is one of the key ways the pest gets spread. “All the EAB team members here in Iowa, we try to stress that fact, try to keep the firewood as local as possible. Keep it in your community and burn it where you buy it,” Kintner says. “Because you just don’t know what is going to hitch a ride — not only EAB — but there’s other concerning insects and diseases out there too that could travel by way of firewood.”

The bug burrows under the bark of the tree and eventually destroys it. There are some treatments available if you want to protect your ash tree, but Kintner says you have to be aware of the timing of the treatment. “Generally speaking treatments can be done from spring until fall,” according to Kintner. “But you don’t want to push it too far into the fall. It’s best to consult if you are thinking about having hired help, consult with your arborists, ask those important questions and make sure that you can feel comfortable, and they can explain why they are treating and when they are treating.”

The EAB is a metallic green bug that is around one-half inch long. EAB infested ash trees include thinning or dying branches in the top of a tree, evidence of woodpecker activity, S-shaped feeding galleries under dead or splitting bark, D-shaped exit holes, and water sprouts along the trunk and main branches. Kintner says you should contact Iowa EAB Team members to have suspicious looking trees checked in counties not currently known to be infested.