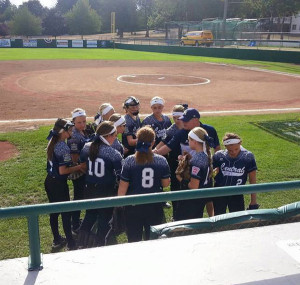 The Central Iowa softball team prepares for a game.

A softball team from central Iowa became the center of a national debate Tuesday in a controversy at the Little League Softball World Series in Portland, Oregon.

The Iowa team of 11 and 12 year olds from Polk City beat Canada Monday to finish pool play at 3-1. They then watched as it appeared the team from Washington was throwing their game to avoid a re-match with the Iowa team.

One of the Iowa assistant coaches, Chris Hobbs, says it became obvious right away that the Washington team wasn’t giving their best effort. “Just from the first inning, from the girls they didn’t have playing and positions they had other girls playing. We kind of had some suspicions at that point I think,” Hobbs says.

The Washington team gave up a no-hitter to the team they were playing from North Carolina. The Washington loss left the pool in a three-way tie, which meant Iowa wouldn’t advance. Hobbs says they filed a protest based on the way the game was played.

The Little League International Tournament Committee ruled there should be a playoff between Iowa and Washington. Hobbs says it was a roller coaster of emotions for the team Monday evening. “Absolutely, the girls were pretty upset and disappointed when we left the field. We were back at the hotel for maybe 45 minutes when we got the text that we were playing at nine in the morning. And then they were pretty fired up after that,” Hobbs says.

The story of the alleged cheating got picked up by national media outlets and was talked about on several shows. Hobbs says they learned Tuesday morning about the buzz across the country. “We became aware of it just through social media and other people back home sharing posts. When I woke up, I read an article on Fox Sports and that’s when I realized it kind of became a big deal nationally,” Hobbs says.

The Iowa team game out and beat the Washington team 3-2 to advance to the semifinals.  Hobbs spoke with Radio Iowa after the first game Tuesday and says he was proud of the way the team responded.

“They were pretty fired up when we got to the field and during warm up and everything. I mean they were ready to go.  They were focused and determined,” Hobbs says. They didn’t have much time to enjoy the win as they had to turn around and play again Tuesday in a nationally televised game on ESPN 2.

They fell behind, but rallied back in the bottom of the sixth inning, before falling 5-4 to the East Regional champion from Rhode Island.