You are here: Home / News / Perry dismisses Trump’s call to ‘build a wall’ as ‘political rhetoric’ 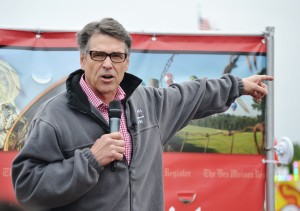 Republican presidential candidate Rick Perry used some frank language during his speech this morning at the Iowa State Fair.

Perry mentioned his hometown of Paint Creek, Texas, often during his speech on The Des Moines Register’s Political Soapbox and presented himself as someone who could restore the American Dream for disillusioned Americans.

“We’re not going to do it unless we deconstruct that crap that’s going on in Washington, D.C.,” Perry said, to applause from the crowd. “I’m telling you, that is the challenge of our lifetime and you need a leader who understands how to do that.”

AUDIO of Perry’s speech at the fair

Perry repeated his campaign theme, that he was a “competent, confident leader” during his 14 year run as governor of Texas. And Perry told the state fair crowd that voters have had a “belly full” of the federal bureaucracy.

“I know that we can put in place policies that will free Americans from overtaxation,” Perry said, “and it starts with breaking up that cabal in Washington, D.C.”

Perry told reporters later that he’s offering a campaign “of solutions” to issues like immigration rather the “just build a wall” idea Donald Trump has advanced.

“That may be good political rhetoric, but the real focus is on how are you going to secure the border,” Perry said.

“Aviation assets that can fly from Tijuana to El Paso to Brownsville. That’s 1933 miles. This is an incredibly long border and looking down 24/7 with the technology we have available today, identifying activities that are clearly illegal or suspicious and fast response teams that can go there at that particular point in time,” Perry said.

Perry suggested Trump’s call for a wall is inferior to that kind of response to security at the southern border.

“Lay it out and use your common sense about which one of these can happen quicker, which one is more effective,” Perry said. “If you just build a wall and you don’t have the other aspects, then all you’ve done is spend a lot of time and a lot of money.”

There was a lone heckler during Perry’s speech and Kim Frederick of Houston spoke with reporters during and after Perry’s appearance.

“I’m from Texas and I’ve just got to say that’s a load,” she said as she walked away at the conclusion of Perry’s speech. “That’s a big old load.”

Frederick periodically yelled about the high rate of uninsured Texans and the state’s education record during Perry’s remarks.