You are here: Home / Agriculture / Poultry producers pushing to get bird flu vaccine as protection this fall 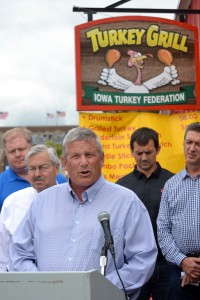 Travel and transport of goods and animals in a 10 kilometer or six-point-two miles zone initially was restricted around the 71 poultry facilities in Iowa that were hit by bird flu. The number of control zones was reduced to just eight by the beginning of August. As of today, over half of the impacted poultry facilities have completed the cleaning and disinfecting process.

“We have 11 sites out of those 71 that have completed clean, disinfecting and testing and are eligible to be able to restock in their facilities,” Northey said. “We have four that have restocked — one that’s turkeys and three that have chickens in them — and we see that number growing significantly over the next few weeks.”

Northey spoke at a news conference this afternoon held in front of the “Turkey Grill” at the Iowa State Fair. Representatives of the poultry industry who also spoke at the event say it’s going to be difficult to repopulate all the empty poultry barns because there’s a shortage of pullets –which are chicks that are less than a year old. Ross Thoreson, the president of the Iowa Turkey Federation’s board of directors, said one-quarter of the turkey farms in Iowa were hit by bird flu.

“We anticipate all farms affected by this disease to be repopulated by the middle of December of this year,” Thoreson said, “so you can see there’s a lot of work that needs to be done.”

Dave Rettig of Rembrandt Farms in Rembrandt had to lay off 200 of his 900 workers when his operation was hit and he’s just started rehiring.

“It was a tsunami that came in,” Rettig said. “Over half the egg production in the state of Iowa was wiped away over the course of three weeks and what took our company 25 years to build, half of it was wiped away in that period of time, so we’re coping with a series of unprecedented situations and all doing the best we can.”

With the threat bird flu might return this fall when wild birds start their migration south, USDA officials have announced plans to acquire a stockpile of vaccines, with the goal of delivering those vaccines within 24 hours to any poultry producers near an infected flock. Iowa Governor Terry Branstad said the industry wants the vaccine now, as a precaution.

“I think the big concern is to get release, to be able to use it, instead of waiting for another outbreak,” Branstad said.

Poultry producers say without the projection of the vaccine, it would be a severe blow to have restocked their barns, only to have to kill the young birds if the outbreak returns this fall.