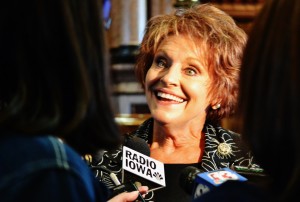 Linda Upmeyer holding a press conference at the Iowa House.

Republicans in the Iowa House have just elected the first woman speaker of the house in state history. Linda Upmeyer of Clear Lake will become speaker in January, when the 2016 Iowa legislature convenes.

“It’s really an exciting day for me on many levels,” Upmeyer told reporters late this morning.

Upmeyer’s late father, Del Stromer served as House Speaker in the early 1980s and Upmeyer grew emotional this morning as she talked about him.

“My dad was an amazing man and so it’s really something to live up to knowing what a good job he did as speaker, watching that and being able to follow in his footsteps,” Upmeyer said, “and I think that there are many things that I learned from him that will hold me in good stead as I do this work.”

Harriet Stromer, Upmeyer’s mother, served as a secretary to her husband during his 23-year legislative career.

“This morning, my mother gave me the lapel pin that was a gavel that she’d given him when he was first elected speaker,” Upmeyer said. “So it’s just a very special moment for our family.”

Upmeyer, though, does not plan to wear that pin until she formally becomes speaker. Her title today is “Speaker-select” and Upmeyer said her new status as the legislature’s first female speaker may be an inspiration to other women to seek public office.

“But you know, I’ve never felt like there was a glass ceiling that I needed to break,” Upmeyer said. “However, in visiting with the public as I go out and recruit candidates and help members campaign, it’s my hope and I know it’s true that there’s a young lady out there somewhere that is going to say: ‘I can do this, too.'”

Republican House Speaker Kraig Paulsen of Hiawatha announced earlier this month that he would not seek reelection in 2016 and will be stepping down from his role in January. The 57 Republicans who serve in the Iowa House met this morning to elect Upmeyer as Paulsen’s successor. She will become the top-ranking Republican in the legislature. Representative Josh Byrnes, a Republican from Osage, unsuccessfully challenged Upmeyer today, to send a message that things need to be run differently in the legislature.

“I feel like I’m in that movie, Groundhog Day,” Byrnes told reporters. “…It’s the same leadership in the House, the same leadership in the Senate. It’s the same governor and the parameters just feel like they’re just set and we can’t move from them. We need new ideas. We need new energy, we need to be able to accept other people’s concepts and infuse those in and I hope that, you know, she can do that.”

According to Byrnes, rank-and-file legislators are upset with missed deadlines, as the legislature has failed to set state school aid levels on time and met for weeks past its scheduled adjournment date. Byrnes also said Iowans are soured by the hyper-partisanship they see from statehouse politicians.

“We’re not lighting the world on fire with Iowans right now and we need to do a better job,” Byrnes said.

“We never should be comfortable with where we’re at,” Upmeyer said. “We always should be striving for innovation and to do things smarter and better and so I absolutely applaud that.”

House Republicans are keeping the vote-count on the speaker’s race secret. Representative Chris Hagenow of Windsor Height was chosen by his Republican peers to serve as House Majority Leader in January. The majority leader is the number two Republican in the House and runs the House debate schedule. Upmeyer has held that job for the past five years. Representative Dave Heaton, a Republican from Mount Pleasant, was among those who emerged from the private meeting of House Republicans to comment on Upmeyer’s election.

“I think she’s proven herself as majority leader to step into the post of speaker,” Heaton said.

Representative Linda Miller, a Republican from Davenport, said the other Republican women in the house are the chairs of committees and didn’t want to move into leadership posts.  Miller sees Upmeyer’s advancement, though, as a recruiting tool for female candidates.

“Hopefully just by virtue of Linda being the speaker, that kind of notoriety will actually help us recruit more women or at least have them think about the job,” Miller told reporters. “Women have to be asked. Men never have to be asked to run for the job. Never.”

Twenty-five years ago, when Republicans won majority control of the Iowa House, Mary Lundby of Marion sought the job of House Speaker, but lost that election. Lundy soon ran for the senate and later became Senate Co-Majority Leader, the first woman to be elected by her peers to a top leadership spot in the legislature.