You are here: Home / Military / Knoxville leaders weighing response to complaint about monument 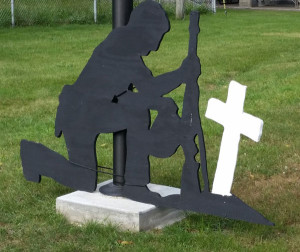 A civil rights group is calling for the removal of a monument in southeast Iowa that honors veterans, while residents are rallying to keep the memorial in place.

The display at a Knoxville city park features the black silhouette of a kneeling soldier and a white cross.

The group Americans United for Separation of Church and State wants the cross removed. Knoxville Mayor Brian Hatch says city leaders are weighing the complaint. “We’re going to do a little research and see what our options are,” Mayor Hatch says. “We’re going to present that to council on September 8th and decide from there. We want to make sure we take the appropriate steps.”

A rally is planned next weekend at the site of the memorial in Young’s Park, which includes an American flag on a pole, a bench, and a patriotically-painted “Freedom Rock.” “We don’t want to see it taken down,” Hatch says. “I think everybody likes the monument and feels that it’s truly a monument to honor the veterans. We would like it to see it stay but we also want to be courteous of everyone and try to come to some sort of happy resolution, if there is one.”

Those organizing the rally at the park on Sunday, August 30th, want the wooden monument left alone. The Washington, D.C.-based Americans United for Separation of Church and State claims the cross, being a religious symbol, should not be on public property as it violates the First Amendment.