You are here: Home / News / Big crowd turns out for Ted Cruz’s Rally for Religious Liberty 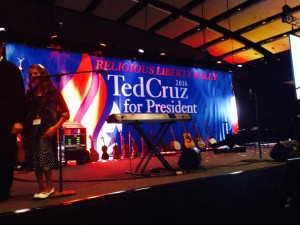 Ted Cruz stage at his rally.

“You want to know what this election is about?” Cruz asked the crowd. “We are one justice away from the Supreme Court saying, ‘Every image of God shall be torn down.'”

At one point in the evening, Cruz sat on stage and interviewed a Grimes couple who were sued after they refused to allow the wedding chapel they own be used for a same-sex wedding.

Betty Odegaard responded: “We could not celebrate a sin. We could not take part in what we believe is a sin.”

The crowd gave Odegaard a lengthy standing ovation for that. Congressman Steve King also addressed the crowd. While King didn’t endorse Cruz, King made it clear he’s been following Cruz’s career for a decade, since Cruz argued a religious liberty case before the U.S. Supreme Court about the display of The 10 Commandments.

“I’m glad we have a leader who has stepped up for our religious freedom, defended the words ‘under God’, Hobby Lobby, The Ten Commandments — over and over again — the Boy Scouts — that all came from Ted Cruz,” King said. “He’s brought us here together here tonight to pray and to learn and to go out of here energized.”

“Forgive us, God. We repent, but there are people here, thousands across our land who say: ‘We want our country back!'” Demastus prayed.

The Bontrager Family Singers of Kalona, a popular Christian group featuring 10 siblings and their parents, have endorsed Cruz and gave a half hour concert before the rally started. Cruz was the evening’s closer and a murmur went through the crowd when he said 54 Evangelical Christians “did not vote in the last election.”

Cruz closed the rally with a prayer, then the Newsboys, a popular Christian group, performed a concert. A small group of protesters shouting, “Citizenship Now,” were escorted out of the hall during Cruz’s speech. Earlier in the day, during Cruz’s visit to the Iowa State Fair, Cruz was confronted by an actress who is gay. Ellen Page and Cruz had a six-minute back-and-forth. with Page arguing a religious liberty defense had been used in the past to excuse discrimination based on race and gender.