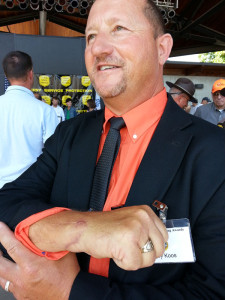 Nine Iowans and an Illinois man were honored today at the Iowa State Fair during the annual Governor’s Lifesaving Awards Ceremony.

Jackson County Supervisor Larry “Buck” Koos was recognized for his actions at a board meeting last September. A disgruntled resident, Francis Glaser, pulled a gun and fired in the direction of the county assessor. Koos then bear-hugged Glaser and wrestled him to the floor.

Another shot was fired, killing Glaser. “I wasn’t afraid at the time. I was actually pretty calm, surprisingly,” Koos said. “If you believe in divine intervention or whatever, someone had me using my whole body and my whole brain to do the right thing.”

Minutes after the incident, Koos admitted he wasn’t feeling as calm. “Well, you know, when it set in what had happened, that an individual was dead and that his plans probably were to do more than he got done…it set in that this was a pretty tragic event,” Koos said.

No one else was injured, except Koos, who badly cut his wrist on shattered glass that was on the floor from the first gunshot. “I’ve got some nerve damage that they tell me is not going to come back, but all in all, I’m happy to be standing here and my body is working just fine,” Koos said. During the ceremony, as the 56-year-old Koos posed for a picture with the governor, a child in the audience shouted, “way to go Grandpa!” 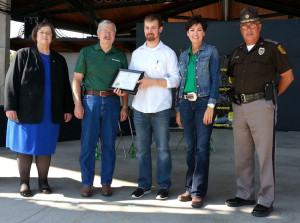 A young western Iowa man was also among those honored. Nineteen-year-old Brett Johnson of Anita is credited with saving the life of his friend, Zachary Thompson, in November of last year.

Thompson’s SUV left an ice-covered road south of Elk Horn and he was partially ejected from the vehicle. Johnson was driving by and ran to help his friend, who was choking.

Thompson’s sweatshirt was caught in the vehicle and around his neck. “I couldn’t recognize him from his face he was so purple,” Johnson said. “He wasn’t breathing and I couldn’t feel a heartbeat at that time.” Johnson was able to free Thompson from the sweatshirt and Thompson has since made a full recovery.

Zachary Nelson — Outstanding Service — Des Moines, Iowa
When Zachary Nelson arrived home from work at 4:00 in the afternoon of January 9, 2015, he noticed smoke coming from the upper portion of his neighbor’s home. He knew that Darrel Chesmore lived there, and he knew that Mr. Chesmore needed a wheelchair, which meant he would need help to evacuate the home safely. Zachary ran into the home, assisted Mr. Chesmore into his wheelchair, moved Mr. Chesmore outdoors to safety, checked the home to be sure no one else was there, and gave Mr. Chesmore a blanket to help endure the 13-degree temperature until the fire department arrived.
Thanks to Zachary’s initiative and quick response, everyone was evacuated safely from the home.

Daniel Bohr and Jake Heisler — Lifesaving — Cresco, Iowa
Around 9:00 a.m. on March 17th, 2014, Brad Lodge was working construction in Lime Springs, when he collapsed. Workers nearby called 9-1-1, and rushed to assist. While Jake Heisler made his way down from scaffolding, Dan Bohr began chest compressions, and when Jake reached the ground, he took over for him.
First responders arrived on scene and took over lifesaving measures. The compressions continued while they readied the Automated External Defibrillator (AED). Mr. Lodge did not respond to the first few AED shocks. When the ambulance arrived, the paramedics immediately took him to the hospital as they continued their work. Mr. Lodge survived, thanks to the quick thinking of Daniel Bohr and Jake Heisler, who immediately began resuscitation attempts.

Brett Johnson — Lifesaving — Anita, Iowa
The roads were icy on November 15, 2014, when Zachary Thompson was driving his Chevy Trailblazer just south of Elk Horn. Mr. Thompson lost control of the vehicle on a patch of ice, and it slid down a steep ditch. He was partially ejected from the vehicle. When Brett Johnson saw the vehicle in the ditch, he immediately went to render aid, and could see that the driver was wearing a hooded sweatshirt. The top of the hood was caught on the vehicle and the bottom of the hood was caught around Zachary’s neck, which prevented circulation. Brett moved quickly to remove that part of the hood and restore circulation. Thanks to his quick thinking and decisive action, Brett Johnson was able save the life of Zachary Thompson.

Renee Johnson – Camanche, Iowa, and Brian Shields – Albany, Illinois — Lifesaving
While he was fishing on the Mississippi River near Clinton/Camanche, around 4:00 p.m. on August 30, 2014, Robert Snowden’s dog, Shelby, fell overboard. When Mr. Snowden tried to rescue her in the strong current, he fell overboard as well. He held the dog in one hand and held onto the boat with the other hand, and the current took them downstream, where the boat lodged, and Mr. Snowden and his dog were pinned out of sight of others on the river. Fortunately, another group of boaters passing by noticed an unoccupied boat and then saw Mr. Snowden hanging on. Brian Shields was able to pull the group’s boat alongside Mr. Snowden’s. It took all three – Brian Shields, Renee Johnson, and off-duty police officer Dean Ottens – to pull Mr. Snowden and his dog Shelby into Brian’s boat. If not for the actions of these great citizens, Mr. Snowden likely would have succumbed to exhaustion and been pulled under the barge.

Michael Vandenberg — Lifesaving — West Burlington, Iowa
Randy Iserman was on his break at work at about 3:00 a.m. on November 8, 2014 when he became sick, and realized that he had a blockage in his airway. He tried to dislodge it on his own but could not do so. He summoned help from supervisor Michael Vandenberg, who quickly performed the Heimlich maneuver on Mr. Iserman. It successfully dislodged the object and Mr. Iserman could breathe again.

Scott Cherne – Guttenberg, Iowa, and Jeffrey Lincoln – Colesburg, Iowa — Lifesaving with Valor
Employees at the Elkader Veterinary Clinic were working on Scott Cherne’s farm, south west of Guttenberg, on a cold, clear morning on November 25, 2014. They called the clinic for some additional vaccines, and clinic employee Tiffany Mueller, headed to the Cherne Farm. When she had not arrived, Jeff Lincoln went to look for her. As he drove over a bridge not far from the farm, he noticed something odd in his rearview mirror. It was tire tracks leading off the roadway. Jeff quickly turned around and found a pickup upside down in the creek below the bridge. When he yelled down to the vehicle and heard nothing, he went back to the farm to call 9-1-1. He and Scott Cherne returned to the bridge and both entered chest deep water and tried to open the door to the partially submerged vehicle. They heard a faint cry for help. The men were able to bring a tractor and loader, and they hooked the chain onto the truck and lifted it out of the water. The water rushed from the cab of the vehicle, and they broke the window and pulled Ms. Mueller from the vehicle. She was taken by ambulance to the local hospital, with a core body temperature of 84 degrees Fahrenheit. They estimated she had been submerged in the frigid water for 45-60 minutes. Ms. Mueller was later released from the hospital, fully recovered. Scott Cherne and Jeffrey Lincoln’s courageous and selfless acts saved the life of Tiffany Mueller.

Larry Koos — Lifesaving with Valor — La Motte, Iowa
The Jackson County Board of Supervisors had their usual meeting on September 9, 2014 at 10:50 a.m. Local resident Francis Glaser was on the agenda to address the Board regarding property tax concerns in an ongoing disagreement with the County. As the discussion became heated, one supervisor noticed that Mr. Glaser had a gun. County Assessor Deb Lane was the first target, and Mr. Glaser shot in her direction as she was leaving the room. Meanwhile Supervisor Larry Koos rushed toward Mr. Glaser, grabbed him from behind in a bear hug, and forced him to the ground near the door, which was covered with shattered glass from the first shot. Two other men also jumped onto Mr. Glaser. A second shot rang out, but this time, it killed Mr. Glaser. It also narrowly missed Larry Koos, who was holding Mr. Glaser down, and the broken glass on the floor caused serious cuts to Larry Koos’s wrist. There is no doubt that Supervisor Larry “Buck” Koos saved the lives of several people attending the Board of Supervisor’s meeting, along with employees, and innocent citizens conducting business at the court house. The actions Mr. Koos took that day were truly brave and taken without regard for his own life. His actions isolated the attacker to one room, and saved the lives of many that day.