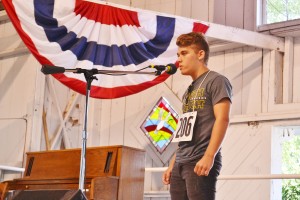 A teenager from Texas has won the youth whistling contest at the 2015 Iowa State Fair.

There were recognizable tunes like the theme to “The Adams Family” TV show. One kid chose “Home on the Range”. Another contestant went traditional, with “Oh My Darling Clementine.” And the contestant who performed “The Hymn of Joy” ended with a flourish of trills. But the winning entry went longer than all the others — more than two minutes — and he was whistling “Ragtime”, a tune written more than a century before he was born.

The judges for the competition sat with their backs to the stage, sort of like “The Voice” TV show, so they heard the whistling, but didn’t see the contestants. Judge Jim Wachuta says he’s no Adam Levine, though.

“Don’t look anything like him — no tattoos,” Wachuta said, with a laugh. “Don’t have his bank account.”

Wachuta said the judges of this State Fair competition were listening to see if the contestants were whistling in key and had good timing, plus the tune had to be recognizable. As the judges scores were tabulated, the event’s mistress of ceremonies had the kids identify themselves for the crowd and explain how they learned to whistle. The 12th contestant to speak offered this revelation: “Hi, I’m Sabu and I am 10 years old and I came from Nepal and one day I just magically knew how to whistle,” he said.

The emcee then interjected, as the crowd cheered: “He gave us the clue. It was magic.”

After all the kids got their turn to speak, the contest’s winner was announced and 15-year-old

of Fort Worth, Texas, was asked to do an encore. This is the fifth year Cannariato has been to the Iowa State Fair, but the first time he’s entered the contest.