You are here: Home / Agriculture / Protests over pigs, debates and citizenship confront candidates at the State Fair 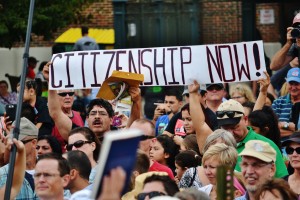 Republican presidential candidate Chris Christie used all of his 20 minutes on The Des Moines Register’s Political Soapbox today to take 16 questions from the State Fair crowd.

And Christie employed his trademark combative style to swat back at a few protesters, including animal rights activists who tried to disrupt his appearance.

“I have to tell you the truth when something like that happens and I’m here in Iowa, man, I feel right at home. It feels like I’m back in Jersey for a couple of minutes, so thank you, Iowa, for doing that,” Christie said to cheers from the crowd.

Christie also took a swipe at some of his competitors for changing their positions on the Renewable Fuels Standard.

“Here’s what I say to the other candidates: Make up your mind,” Christie said. “Don’t say one thing in Iowa and say something different in New Hampshire and something different in South Carolina. You’ve got a position. Tell the people of the country what your position is…I’m for the Renewable Fuels Standard and that won’t change and when I’m president, we will enforce the law that’s on the books — all the laws that are on the books.” 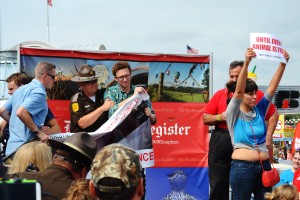 The same group of protesters chanted an hour later during GOP candidate Bobby Jindal’s turn on the Soapbox stage. Jindal at three different points in his speech addressed the protesters directly,

“If you want to come to our country, come legally, learn English, adopt our values,” Jindal said to cheers. “And when you get here, roll up your sleeves and get to work.”

Jindal accused “big business” of sending the protesters and he told the crowd his parents, who immigrated to the U.S. from India, did it “the right way” and became naturalized citizens.

Earlier in the morning, a smaller group of protesters at the State Fair tried to confront the chairwoman of the Democratic National Committee, arguing the party should have more debates featuring the candidates vying for the 2016 Democratic presidential nomination. The group was in place well before DNC chair Debbie Wasserman-Schultz arrived at The Des Moines Register’s Political Soapbox. 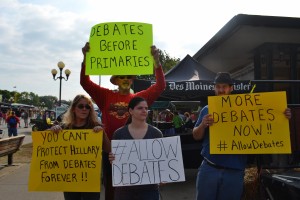 “Hi, we’re collecting signatures to pressure the Democratic National Committee to allow more debates. They’re only hosting six debates in this election cycle and candidates are restricted from attending any outside debates,” one of the protesters repeated to passersby.

Democratic National Committee chairwoman Debbie Wasserman-Schultz was greeted with cheers and some boos when she began speaking — and when she ended.

“We want debates,” the protesters shouted over and over.

Kim Frederick of Houston shouted back: “We want you guys to shut up.”

Frederick periodically yelled out criticism during former Texas Governor Rick Perry’s speech at the Fair earlier in the week. On Saturday, Frederick said she didn’t try to “shut down” Perry’s whole speech.

“I didn’t do that,” she said, in reference to the “Allow Debates” protesters. “That’s inappropriate.”

Wasserman-Schultz, a Florida congresswoman, has been chair of the Democratic National Committee since December of 2011. This is the first time during her tenure that Democrats have had a competitive presidential race and the party has sanctioned six debates among the 2016 candidates.