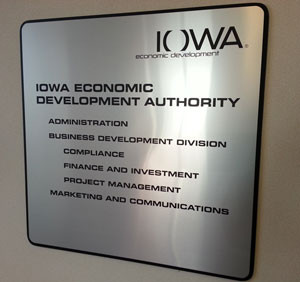 An eastern Iowa city is going to add hundreds of new jobs with the help of a company in the eastern United States.

“East Penn manufacturing is going to be creating 350 jobs in Oelwein, which is a very significantly sized project with $64 million in capital investment that this company is making for warehousing, buildings with auxiliary equipment, those kinds of things,” Hoffman says. She says the Oelwein facility will make products to support the company’s Transportation Starting, Lighting and Ignition battery division.

“High quality batteries and battery accessories for commercial markets, industrial markets, those kinds of things,” according to Hoffman. The jobs promised a wage of $13.55 to win the state funding. Hoffman says the proposal is to have the plant up and running by November of 2017. The Oelwein award was one of several approved Friday by the IEDA board for new or existing businesses.

The board also approved three awards from two funds that are designed to help entrepreneurs turn technology or concepts into businesses. One award was approved for a central Iowa technology company. “Priority 5, which is located in Ames, is a company that is providing technology solutions as it relates to the data that is becoming available to 911 operators or police sensors and data,” Hoffman explains. They’ve created a system that helps agencies process all the camera feeds, sensors and alarms, radar and sonar, video analytics, 911 calls that come in.

“They’ve developed a platform called the Touch Assisted Command and Control System (TACCS™), which is a software that helps represent all of those elements for dispatchers and the like. So, they were awarded a $250,000 loan from what we call the Innovation Acceleration Fund to kind of move their product forward,” Hoffman says. She says the $250,000 is a large award for this type of business, but she says it signifies how far along they are in their development. Another Ames company won a $25,000 grant.

“Inland Sea — which is planning to build state-of-the-art recirculating aquaculture system to produce salmon. And so, that company is at an earlier stage and is really trying to understand what commercial relevance its company has in the marketplace. The award for Inland Sea comes from what’s called the Proof of Commercial Relevance (POCR) Fund, which helps businesses advance after they have proven their plan works.

Sioux Natural in Sioux City is a food technology company that also received a POCR grant. “They’ve developed a patent-pending intellectual property platform for naturally derived sugar substitutes,” Hoffman explains. “So obviously we are all trying to be healthier and Sioux Natural thinks they have a product that has a lot of applications for commercial and home baking.” Their grant is for $25,000.

“This small award will help them to take it to full commercialization to see what markets are out there for them,” Hoffman says. Sioux Natural was established in 2012 and the company says their products offer significant benefits over existing artificial sweeteners in that they offer a true one-for-one replacement for sugar.