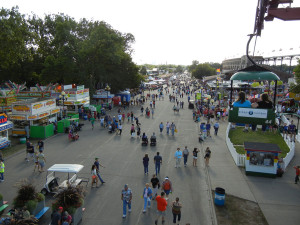 A record number of people attended the 2015 Iowa State Fair which ended Sunday. “We had an estimated attendance of 1,117,398 for our 11 days of the 2015 fair,” spokesperson MindyWilliamson said. That broke the previous record from 2008.

Attendance at the ’08 fair hit 1,109,150. Back in April, Governor Terry Branstad signed a bill into law which mandates schools start classes no earlier than August 23rd.

“The fact that schools started after the state fair, I think, definitely played a factor,” Williamson said. “If you looked around the fairgrounds, there were a lot of families enjoying weekdays, not just the weekends.” In addition, more students participated in FFA and 4-H activities at this year’s fair, according to Williamson.

She also gives credit to popular grandstand acts and good weather. “Mother Nature cooperated pretty well this year. We did have some rain on Tuesday and a good shower on Thursday night as well,” Williamson said. “Our attendance on Tuesday was 75,000, but our weekends definitely made up for that.”