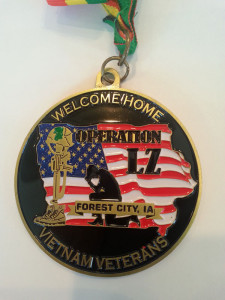 In North Iowa this week, a celebration for Vietnam War veterans is being held 40 years after most of the soldiers returned home. Known as “Operation LZ”, the five-day long event was organized as way to thank Vietnam Veterans, who received little to no recognition back in 1975 due to the unpopularity of the war.

One of the organizers, Vietnam veteran Bob Havner, says the kickoff event will involve a motorcycle ride Wednesday morning as a 300-foot long Vietnam Traveling Wall Memorial is escorted into Forest City.

“Motorcycle riders from around the state of Iowa and outside the state are going to gather and create a convoy,” Havner says. The motorcycle convoy will travel on I-35 between the Boondocks and Forest City.

Over the weekend, one of the highlights will involve helicopter rides. Havner says the Huey and Cobra helicopter rides will launch from the Forest City Airport. A special commemorative gift set, which includes a medallion, has been created. It will only be available to those Veterans who preregister on-line at OperationLZ.com.

Some of the speakers who will be on hand throughout the weekend include Governor Terry Branstad and Naval Lieutenant Commander Larry Spencer, who survived 7 years in a North Vietnam prison camp.