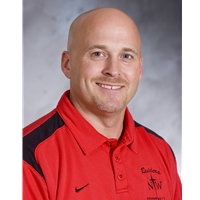 Northwestern College football coach Kyle Achterhoff plans to eventually settle on a starting quarterback but for now is content to let the competition play itself out.

“We need to develop some consistency there”, said Achterhoff. “Until one of those guys steps up and becomes the most consistent player we might rely on more than one.”

Whoever eventually wins the job will take over an offense that prides itself on balance. Northwestern averaged 167 yards of rushing and 163 through the air en route to an 8-3 record and a share of the Great Plains Athletic Conference championship.

The Red Raiders return eight starters from a defense that yielded just over 15 points per game and Achterhoff says the strength of that unit is a talented defensive line.

“We have a tremendous starting three but we feel like we can go seven or eight deep without much drop off”, said Achterhoff. We also feel we have one of the best corners if not the best corner in the nation in Justin Wohlert, who had ten interceptions last year.”

Northwestern enters the season ranked 12th and will be in search of a fourth consecutive trip to the NAIA playoffs. The Red Raiders open September fifth with a visit to Tabor College in Kansas.